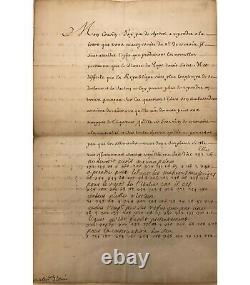 Born in Saint German in Laye. King of France and Navarre. War of the succession of Spain. He remained by his side until 1703 as ambassador of louis xiv. The installation of Philippe v on the despagne throne led to fierce opposition from several European powers.

Following the treaty signed at the hague on 7 September 1701, an alliance bringing together Langleterre, the republic of the seven-united provinces of the countries, the kingdom of Portugal and the Holy Roman Empire of Germany was formed to counter the ambitions of France during the war of succession of Thepagne. As the war moved rapidly in Italy, Louis xiv worried about whether the republic of Venice would remain neutral or declare itself against it: it was difficult for the republic to avoid declaring itself any longer and the luy season no longer allowed the government to answer in general terms on the winter districts. Its ambassador continues to massage what nen will give the trouppes of the pm, that nothing will do anything contrary to neutrality and on all things that will not allow the Germans to enter its places.

(following an encrypted passage but whose translation was made at the time between the lines) it should not have any trouble to take with the pope the necessary measures for the rest of litalia because it is certain which nirritera will be less lemp (ereu)r by his refusals than by a league what iron is now for the preservation of his own pais that the latter party is more in line with his true interests and that he responds better to the idea of the prudence of the senate finally few days will apparently clearly used that the Venetians want to make troops and gallions that they prepare. The item \"louis xiv. Signed letter (secretary), October 27, 1701 ref. G 54\" is on sale since Monday, October 12, 2020. It is in the category \"collections-letters, old papers-autographs-historical personalities\". The seller is \"bibliolibrum\" and is located at/in. This item can be delivered anywhere in the world.