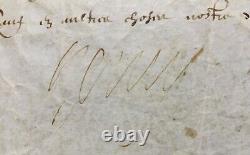 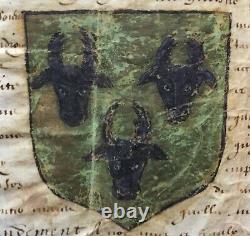 Henri iv King of France document / letter signed with coat of arms letter of ennoblement 1593. Superb document and content signed \"henry\", April 1593, 1 page oblong in plano, letter of ennoblement, browning of three heads of sand beef, in favor of guillaume henry dheulland troop commander who has \"dignifiedly and courageously faict walled his virtue and valleur to the peril of his life to the battles of monontour, coutras, ivry.\" Battle of Moncontour (03/10/1569): the Catholic forces of King Charles ix, under the command of the Duke of Anjou (future henri iii), defeated the Huguenot troops, commanded by the Gaspard Admiral of Coligny (3rd War of Religion). Battle of coutras (20/10/1587): during the wars of religion, victory of the navarre henri (future henri iv) on the royal army commanded by the duke anne of merry. Battle divry (14/03/1590): during the Wars of Religion, it pitted the royal army commanded by the victorious henri iv against the league-winning army, reinforced by Spanish contingents, commanded by the Duke of Mayenne.

\"Henry by the grace of god roy of France and Navarre has all salvation. The royals our predecessors and we toujiours in ung singular soing to remit in honors dignite charges and people who by their own virtue and merites make them worthy and recommend us has the public thing by their reported services so that by this meen each be davantaige invited to do well follows the example of others and in doing so our king is so much happier and flourishing in the least of which he found several personnaiges who pushed the same zele and for the witness of the x that is their own have made proof of the effect that they have so much to us that to many of these stat and crown in divine acts depending on that the opportunities presented themselves ain that our loved william henry dheulland commander will remain which and son of georges amedée dheulland commanding the troops of fauxbourg of x has very dignified and courageously fainted wall his virtue and valleur to the peril of his life so much to the battles of? From my monontour of coutras and divry that sieger of places ataqué or defended since ourest event has the crown and have received large and dangerous wounds on several endroicts of his body at all occasions that have presented for ourest person and in our presences by all or our service called us he still called us dignified servy both in our own royalaulism and out of icelluy [against] the estranger princes where we sent us important charges and command and whose aquity to our contentment has left us by this moien a good vollonity and affection of the recongnoistre to its valleur and virtue. For these causes and aultres considerations has this we call guillaume henry dheulland its enfents and posterity masles or females born or a birth in marriage of our great plain power and kingal auctority anobly and annoblons of the tiltre and quality of nobility decore and decorons want to let any acts and endroicts and judgments that out they are held supposed and reputeed for nobles and can wear the tiltre intended to enjoy all honors prerogatibves privileges and preeminences enjoy and have accoustume to enjoy and wear the nobles of our king isanct of noble and ancient race and as such they can acquire hold and possess all fiefdoms and noble possessions of any quality and nature whatever and iceulx together that they acquired and enjoyed everything as well as if they [were] born of noble and ancient race without them being held or can be compelled to love dhuillard audit and has its posterity of our plain and ample thanks to auctroie and auctroions that they can now wear in all places and endroicts or whatever their coats of arms and stamps as we give them by these presents and whatever are sy emprainctes icelles and put by all their lordship all ainsy and by the form and way that accoustume do the noble aultres of this kingship without for reason of our presente grace they are held to us and to our royal successors aulcun services ny compensation of which sum valleur and estimate whatever and can rise us in audit henry dhoullant for considerations susdictes faict and make donation by these presentes signed by our hand.

If we give in order to our loved ones and feaux the people of our court of parliament has bet our accounts and courses of our presidents and tresoriers feaux a bets and aultres our officers that he will apartiendra and each deulx that he presents that annoblation gift darmes and finances because that is our pleasure and so that it is stable thing we have been to put our our santel a? In the month of April lan of grace mille five cens eighty treze and ourre reigns the fourth. Good condition - sending by chronopost. The item \"henri iv king of France letter signed with coat of arms letter of failure 1593\" is on sale since Friday, February 26, 2021. It is in the category \"collections-letters, old papers-autographs-historical personalities\".