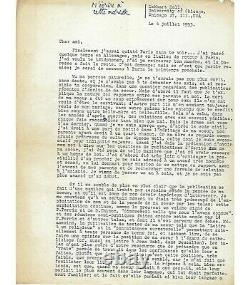 Add this shop to my favorites. Weil (Andreus), mathematician, brother of the philosopher Simone Weil. Weil (andre) born in Paris. Mathematician, he was one of the founding members of the bourbaki group. Weil" to "cher ami" (maurice merleau-ponty).

2 pages in-folio (paper peel) with some autograph corrections to the pen. An exciting letter in which andré weil expresses his concerns about the spiritual legacy of his on and demand to merleau-ponty. Your opinions, and if possible your cooperation, in a question looking at recent publications described from my on. But first I have to explain to you the nature of the relationship between my parents and me.

The death of my sur was an extremely hard blow for them; they wanted to be the survivor; on the other hand they had always wanted my marriage, without any reason of course other than the well-known conflict between mother-in-law and daughter-in-law. This is my worth, in the years after war, of often painful relations with them. But the drama came last, when I realized that, according to the civil code, I was entitled to a half share in the legacy of my own. But my mother looks upon herself as a great priestess of the worship of simone weil, of which I am excommunicated for major indignity.

When I made the claim to have my say on the issues of publication described in my account, I was received in such a way that I had to resort to a lawyer. At first I was very far from considering the possibility of a trial; I addressed a very honest and sensible confessor, giving him the mission to contact my parents' lawyer and to seek a formula for a solution to lamiable. I've just spent a year on this, and I'm no more advanced than at the beginning. Weil states that the publication clearly betrays.

On some sides the thought of my own. And that he has to intervene. As much as the talas and he quotes p. "Simone weill as we've known it." Pretend to rely on his confidences rather than on his writings to restore his thought. However, "letter to a religious" and "supernatural knowledge" clearly illuminate his position on Catholicism. My parents are already completely scrambled with Father Perrin (in which way I cannot give them reason, because he is personally a very brave type, while participating in the intellectual dishonesty to which these people hardly escape), there is no risk that they lend their hands to falsification of the thought of my on in that sense... But there is now another danger. My parents have long had a very great confidence in the name boris suvarine, formerly very friend of my sister, professional antibolshevik, and one of the most false spirits I know. They gave him a manuscript of his on, which appeared in "evidence." Seasoned with comments of his own. Weil made him understand that he had a voice in the publications of the writings of his sur but suvarina repeated by republishing several articles of s. Weil in the magazine "evidences".

(who, as his correspondent certainly knows, is an anticommunist propaganda periodical, subsidized by funds of American origin)... Assorted anonymous comments (souvarine), in which the reader.

Is asked to think of lurss when reading the article. Ma sur did not have the slightest sympathy for Stalinist communism and even gradually disgusted with virtually all the so-called "extreme-left" movements. I believe that the publication of texts of this kind which have as their subject Hitler's lallemagne, in this context and with such comments, constitutes a falsification. In the future, he intends to do what is legally necessary so that such facts cannot be repeated, and calls on merleau-ponti to publish an article in which he would warn the public. Against the two kinds of falsification to which is exposed the thought of my sur.

Simone adolphine weil is a humanist philosopher, professor, writer, born in Paris on February 3, 1909 and died in Ashford (angleterre) on August 24, 1943. She made philosophy a way of life, to be in the truth. As early as 1931, she taught philosophy and became interested in anti-Stalin Marxist currents. She is one of the only philosophers to have lived in her flesh "the working-class condition".

Successively militant trade union, close to the Trotskyist and anarchist revolutionary groups but without ever joining any political party, writing especially in the magazines the proletarian revolution and social criticism, then engaged in resistance within the Gaullist circles of London, simone weil stopped living in a demanding quest for justice and charity. The item "weil (andre), mathematician, brother of the philosopher simone weil. Signed letter" has been on sale since Thursday, October 8, 2020. It is in the category "collections\letters, old papers\autographs\historical persons". The seller is "bibliolibrum" and is located at/en fr.