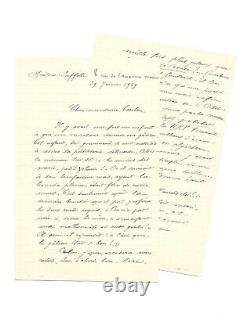 Autograph letter signed "ernest delahaye" to marcel coulon maisons-laffitte, 29 June 1929, 6 p. Grand in-8, envelope autograph attached small holes dagrafe in the lower margin without harming the text. Magnificent unpublished letter with multiple references and allusions from the Rimbald. Delahaye remembered the journey of the young prodigy to the parnasse, between acceptance and rejection, and the mythical letter "jumphe" that Rimbaud addressed to him in June 1872. He then reports three unpublished quotations of rimbaud, two of which follow on from the case of bruxelles.

"Dear mister coulon, there was once a child to whom a gentleman gave a cake. This very greedy child immediately began to devour the delicious pastry. Then his mom said, "At least say thank you, naughty little girl!

And he smiled at his benefactor, but, having his mouth full, was forced to remain silent. It was only after the last bite that he could speak the two required words. "we didn't know," the mother exclaimed, "a child so dishonest and so greedy! To what he replied, "It was that the cake was so good!

This, I hope, will excuse my delay. Read first, read, read, until the end, which comes too fast. [delahaye reacts here to the book published a few days earlier by the Marcel coulon rimbaldian, the life of rimbaud and his work, mercury of france, 1929] for example, what quotations!

I'm not just talking about me, which you spoiled, but the letter of [leon] valade, is it pretty! He liked Rimbaud, you know.

I know that Rimbaud loved him, that he was afflicted by his abandonment at the time of indignation in the little parnasse. He reminded me of a manuscript poem that valade had given him. If I wasn't the mess in person, I would have kept this beautiful work. It must have been published since then. I remember the first verses: so cold I want you, O grave, that the layer lacks a word (1) of earth where I will lay on my back finally lighten the burning fever of my bones, the fever qualluma the kiss of his mouth!

[the poem quoted here is "sepulture" of léon valade collected by paul budet and jules claretie] and I finally had the pleasure that I owe you, for you are reviving for me rimbaud always a little more the pleasure of rereading this beautiful letter of "jumph 72: rimbaud sy represents in his work as a writer and informs his friend about the life he leads to bets with sensitivity and vivacity], so affectionate and where this adorable description of labsinthe! Now here's a detail that comes to me. I asked him, a few weeks later: "So what did they say, the cloportes [allusion to a passage of the letter jumphe 72], when you smoked your hammer pipe? "It made them disgust" salva reverentia, isn't it, dear mister coulon, I won't tell this thing in front of the ladies, but between men and then it rejuvenates me so much!

With this letter I kept the one where rimbaud manned (a coming from rock) in these terms the condemnation of our poor friend [verlaine, following the case of bruxelles]: "a news to grow peaks of peacock on a" horresco at such referens point ["I tremble by telling it", quotation virgilian eneide, ii, 204] that I prefer the points of suspension. "Verlaine has two years in prison! What became above all the large four-page letter, on bubble paper, written in the spring of 71, to the library of charleville (where the white paper was missing that day, no doubt)?

He told me about his appointment with the young person described as follows: "to the physical, striking analogy with psuke", did not name her but added this: "his mother to the Catholic soul, his father has lauded magistrate". Delahaye therefore referred to two letters which were later lost and which no one had echoed to date, the first probably dated July / August 1872, following that of jumphe 72, the other probably dated from August 1873, after the announcement of verlaine's imprisonment.

To these two missives is added the famous letter of May 1871 on lenigmatic psuke, which delahaye later reported only a few of which he remembered that, didn't he? Must explain why the little girl actually came to the square with her maid: it seems that a magistrate could have some of these narquois curiosities, with, of course, some precautions that are absolutely appropriate. He also told me about [frederic] mistral, men gave a long quote.

Yes, where is this most serious autograph of all? Barthou, who doesn't know him. Where is the sneaky collector, a hundred times darker, a thousand times jealouser than the venise plus? [translation to d'othello by alfred de vigny, published in 1829] how many million would it be worth? I was born only part of the sum, but finally the whole world would "cauterize", to speak like the lady to the seven little chairs, and the n. Would immediately draw 14 million copies.

It would be motivating that if, myself, I had read, very simple, not to deliver the bubble paper I know well as verlain writing: I should have! [loves, letinian lucian, xvi] but again thank you, dear mister coulon, and very cordially to you, ernest delahaye". In his letter to delahaye of June 1872, known as jumphe, rimbaud reported to him.

I was smoking my hammer pipe, spitting on the tiles, because it was a mansard, my room. At five o'clock I went down to buy some bread; it's time. The workers are on the move everywhere. It's time to get drunk at the wine merchants, for me. I went home to eat, and lay down at seven o'clock in the morning, when the sun brought out the clumps from under the tiles. The item "rimbaud ernest delahaye / letter autograph signed / parnasse / prison / 1872" has been on sale since Saturday 14 August 2021. It is in the category "collections\letters, old papers\autographs\others". The seller is "laurent-autographs" and is located at/in versailles. This item can be delivered anywhere in the world.