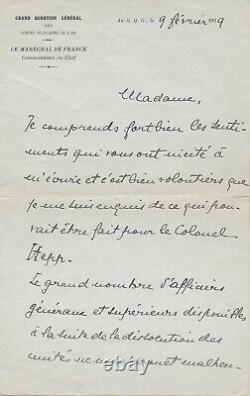 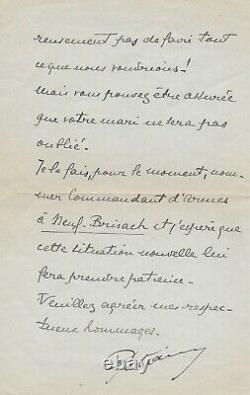 9 February 1919; 2 pages in-8° oblong on letterhead "Great Headquarters the Marshal of France Commander-in-Chief". Colonel Horace-philippe hepp, a great war wounded, amputated with a leg, is looking for a post in the French army that would give back some chili to his career. He sent his wife, soliciting the Petten Marshal who was well-known during the conflict. "Ma'am, I understand very well the feelings that prompted you to write, and I am very happy that I inquired about what could be done for Colonel Hepp. Unfortunately, the large number of general and superior officers available following the dissolution of the units does not allow us to do everything we would like!

But you can rest assured that your husband will not be forgotten. I am doing so, for the time being, to appoint commander of nine-brisach weapons and I hope that this new situation will bring him patience." On November 11, 1918, the philippic general was elevated to the dignity of Marshal de France on November 11, 1918. After a victory of which he remained with the main craftsman, he enjoyed such prestige that the government maintained him for more than ten years as commander-in-chief-designate of the French armies. The item "philippe petain letter autograph signed First World War" has been on sale since Wednesday 15 December 2021.