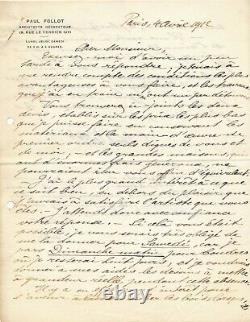 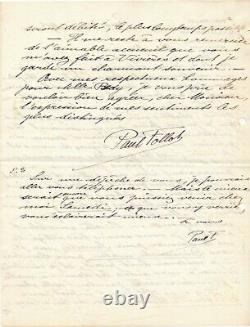 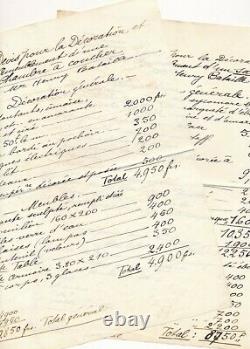 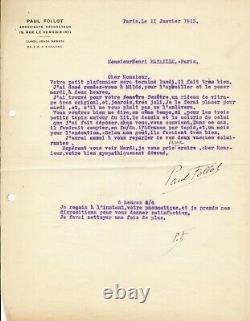 Signed autograph letter to playwright Henry Battle. A signed letter is attached to the same page (1 page in-4, bets, 1913, header).

Careful work at the chateau de viviières (aisne), a house dhenry battle. Paul follot sends two quotes (attached to the letter) "set out on the lowest prices that I can make by keeping the first-rate materials and labour alone worthy of you and me." "I have the greatest interest in it being good, apart from the pleasure that I would have to satisfy the artist you are." He pointed out that the wood, when drawn, would have to dry as long as possible. The first estimate concerns the bedroom furniture for 9,850 francs, the second for the decoration and furnishing of a living room.

In the letter tapuscrite, paul fololet evokes a ceiling lamp, a "very original glass curtain" and three carpets "according to my taste, they would do very well". Henry battle acquired the castle in 1910 and occupied it until 1914, when it was transformed by the Germans into a field hospital. He returned only one day in 1916. The item "paul follot architect decorator letter autograph signed quote henry battle" has been on sale since Tuesday, November 9, 2021. It is in the category "collections\letters, old papers\letters".