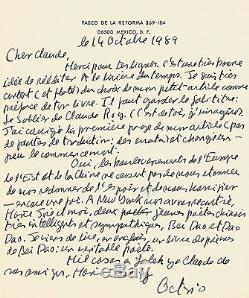 The autograph bookshop of the centuries has specialized for many years in the sale of autograph letters and manuscripts. Manuscripts of those who made the glory of the arts, literature, our history and science during the past centuries. Nobel Prize for Literature in 1990.

Autograph letter signed by the writer Claude Roy. A small page in-4 ° on paper at his address. Interesting letter from the Mexican poet, rejoicing first of the future publication of his friend, before welcoming the uprisings of the Chinese people and the looming fall of the Berlin Wall.

He ends by praising the Chinese poet. \It is a very good idea to reissue at the edge of time. I am very happy (and flattered) about the choice of my little article as a preface to your book. We must keep the beautiful title: the hourglass of claude roy. (That's all you imagine) I corrected the first of my article (no mistake of translation: errata) and changed the beginning a bit.

Yes, the upheavals of the United States of America and China do not cease to amaze us, to give us hope and magnify us once more. In New York we met, marie-josé and I, two young Chinese poets very intelligent and friendly, bei dao and dao dao. I just read, in English, a poem book of bei dao: a true poet. Roy there is claude de sus amigos marie-josé and octavio.

(1940-), whose real name is zhao zhenkai, is a Chinese writer, both a poet and a novelist. At the end of the seventies, he was still a construction worker and it was not until 1979 that he published his first vague novel.

In the 1980s, bei dao wrote four other novels: melody, the moon on the manuscript, crossing and 13 rue du bonheur. During the Tiananmen Square protests in 1989, his poem \Then in Berlin, bei dao is forbidden to return to China and is forced into forced exile until 2006. At the edge of the sky. And landscape above zero, published by circé editions, gather poems written between 1989 and 1996. In these two collections, we find the concerns that have always been those of bei dao: the attention paid to language, the taste for short forms and for the paradox.

He received numerous literary prizes, including the Tucholsky Prize for Pen / Swedish and the Pen / Barbara Goldsmith Freedom to Write Award in 1990. He was also nominated several times for the Nobel Prize for Literature.