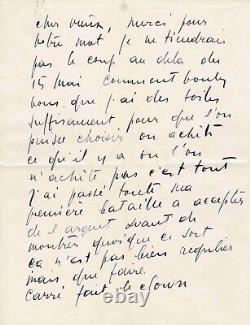 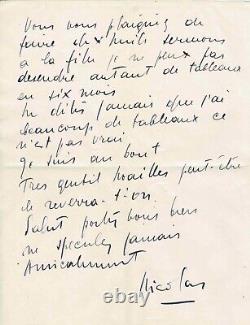 For many years, the autograph library has specialized in the sale of autograph letters and manuscripts. Signed autograph letter to "a dear old man" [probably jacques dubourg]. "Never say I have a lot of paintings, that's not true.

I'm at the end. Seizing letter of nicolas de Staël exhausted by his painting.

"Dear old man, thank you for your word. I won't hold on beyond May 15th.

How do you want me to have enough canvases for us to choose. We just buy what's or we don't buy, that's all.

I spent my whole first battle accepting money before showing anything, it's not very regular, but what to do. [the square louis gallerist, one of his oldest supporters]. You were complaining about making eighteen sermons in the line, I can't get down so many paintings in six months. Don't ever say I have a lot of paintings, that's not true. Very nice, honeycombs, maybe we'll see him again.

Indeed, the expression of intense anguish in Staël is peculiar to this period of the painter's life; it is not tinted with so much despair before. One particular point mentioned here by the painter is indicative of the new pressure he has to endure, that of the art market, on which he wonders: we buy what is or does not buy, that's all. I spent my first fight accepting money before I showed anything.

It's not regular, but what to do? He then finds himself in an extremely delicate situation: "courted by art lovers from all over the world, at a precise moment when ancient and modern painting becomes values "specculative, Staël passed in June 1953... A contract of exclusivity for the American, with the famous merchant paul rosenberg, installed in new-york. It is also now the obligation to produce, to satisfy the pressing demands of merchants and amateurs (1). Indeed, the exhibition projects were carried out in 1955: at the Grimaldi Museum for the summer; at the Galerie Jacques dubourg for the month of June; at the Musée d'antibes planned for August (exhibition which will be maintained despite the artist's suicide); and two projects in Europe: at the Galerie Tooth en angleterre and at the Musée de zurich. Staël works several paintings at the same time, the works come out too early from the workshop, sometimes going so far as to get damaged and require retouching. He wonders in our letter: how do you want me to have enough canvases for us to choose? This reflection echoes two letters written in 1955 in Jacobs dubourg: "I can't paint kilometers of still life and landscapes, it's not enough (3)", or don't think I'm a factory, I'm doing what I can. In this sense, he extends his idea here: "Never say that I have many paintings that is not true". He seems to ask his friend for support that escapes the lie, the infernal rhythm of this milieu that undermines his soul and prevents him from creating as an artist, forcing him to reproduce an expected and frozen aesthetic.

As proof of his commitment to this idea, he returns to it just before his greetings in a mandatory and serious sentence: "Never speculate". In this poignant letter, nicolas de Staël stresses above all the fragility of his forces, in a very concrete way, by evoking the deadlines imposed on him: "I cannot descend so many paintings in six months". This term recurnts in the expression of the painter, is analyzed by the françoise of Staël: this trivial expression when connected with a moment of spiritual tension has another meaning: each time it is an elevation.

"down" is understood as coming down from the ideal in the illumination of the color. Always being in those fires is consuming for a man (5).

Nicolas de Staël confirms the fatality of this point of view in our letter: "I would not hold the blow beyond 15 May". She says all the exhaustion and all the tension that the painter suffers, not to mention the premonitory charge that this sentence could give to his suicide, on March 16, 1955. He finally concluded his letter on a lapidary and unappealable observation: "I am at the end".

I cry alone in front of the paintings, they slowly humanize themselves, very gently backwards (6). Staël, guy dumur, flammarion, paris, 1975, p. Nicolas de Staël, centre pompidou, paris, 2003, p. Letter to Jacques dubourg, November 6, 1954. Nicolas de Staël - lettres. Letter to Jacques dubourg, Antibes, February 26, 1955. Catalogue raisonné de l'œuvre peint, françoise de Staël, éditions idées et calendes, neuchâtel, 1997, p. Letter à pierre lecuire, antibes, November 27, 1954. Consult our manuscripts The Autograph Gallery of Centuries specializes in the sale and expertise of autograph letters and manuscripts of the great personalities of past centuries. Purchase / payment methods we accept the following methods of payment: transfers and bank cheques. The prices shown are in euros and are net. We can also ship by private carrier at your request. Conditions of sale in accordance with the practice of the international league of the ancient bookstore, we accept a guarantee of return within 14 days. The return costs are borne by the buyer. About all the pieces proposed are originals whose authenticity we guarantee. Our invoices serve as proof of authenticity of the parts sold. However, at your request, we may establish a certificate of authenticity, in addition. This item is in the category "books, bd, magazines\old books, collection". The seller is "juniennn0" and is located in this country: en. This item can be shipped to the following country: whole world.