Marechal Philippe Petain. Autograph Letter Signed On The Eve Of The 1938 War 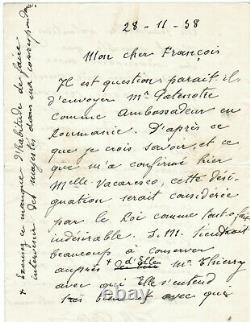 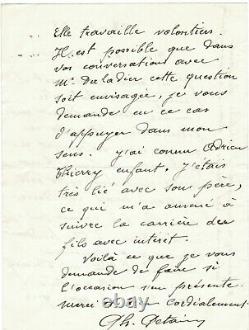 Appointment french ambassador to Romania. Beautiful autograph letter signed by Petain on the eve of the Second World War dated November 28, 1938. It is said that there is talk of sending mr paternotre as ambassador to Romania. From what I think I know and what confirmed to me yesterday melle vacaresco, this designation would be considered by the king as quite unsirable.

Sm would like to keep that from her mr thierry with whom she gets along very well and with whom she works willingly. It is possible that in your conversations with mr Daladier this issue will be considered, I ask you in this case to support in my view.

I knew Adrien thierry as a child. I was very connected with his father, which led me to follow the son's career with interest. That is what I am asking you to do if the opportunity presents itself. Thank you and very cordially. Excuse this lack of habit of involving majesties in my correspondence.

It is in the category \"collections-letters, old papers-autographs-historical personalities\". The seller is \"camillmeri0\" and is located in montauban. This item can be delivered anywhere in the world.