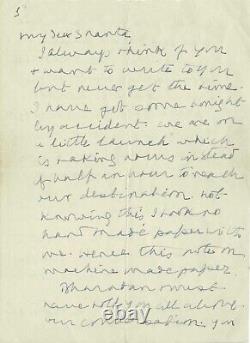 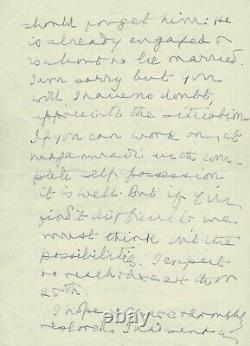 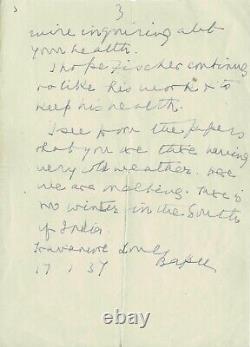 For many years, the autograph library has specialized in the sale of autograph letters and manuscripts. Mohandas karamchand, the Mahatma gandhi. Autograph letter signed "bapu" to shanta s. Three pages in-4° in English. Gandhi, intimate and caring, gives her advice to her protégé Shanta s.

My Dear Shanta, i always think of you & want to write to you but never get the time. I have get some tone by accident. We are on a little launch which is taking hours instead of half an hour to reach our destination. Not knowing this i took no handmade paper with me. Hence this note machine made paper.

Bharatan must have toold you all about our conversation. He is ready engaged & is about to be married.

If you can work on at maganwardi with complete self-possession, it is well. But if you find it difficult, we must think on the possibilities.

I expect to reach there 24. I had felt a wire inquiring about your health.

I hope fischer continue to like his work & to keep his health. I see from the papers that you are having very hot weather.

There is no winter in the south of india. "My dear Shanta, I always think of you and I want to write to you but I never find the time.

Luckily, I've got some tonight. We're on a small boat that takes hours instead of half an hour to reach our destination.

Not knowing that, I don't have. Hence this note on a paper machine.

Bharatan must have told you everything about our conversation. He's already engaged and about to get married.

I'm sorry, but I'm sure you can adapt to the situation. If you can keep working at maganwardi in peace, that's good.

But if you find it difficult, we have to think about the other possibilities. I think I'll be there on the 24th or the 25th.

I hope you're perfectly well restored. I sent a telegram to inquire about your health. I hope that fischer continues to love his work and to maintain his good health. I see in the papers that you have a very hot weather. There is no winter in the south of.

The recipient of this letter is Shanta s. Patel, daughter of Shankarbhai patel. His family was very close. Who acted as protector of Shanta, as evidenced by this letter and the rest of their correspondence (which began around 1930). The letters from gandhi to Shanta form a correspondence of precepts and advice of existence, sweeping all aspects of the girl's life, from morality to food. The paternal tone of gandhi confirms the role of surrogate father he seems to have played with shanta, which he sometimes calls his "dear daughter". Gandhi asks him here to give up a man already engaged and about to get married. These father's counsels are accompanied by an invitation to stay and work in maganwardi, the name of the gandhi "headquarter" established inwardha, in the centre of India. The gandhi mahatma settled in 1936 after a last stay in prison. He spent twelve years there, until his death in 1948.

The name shanta reappeared under the pen of gandhi a few months later, on the 4th. August 1937, when he wrote, "Did I tell you that shanta n. Happy with mahadev and tr.

S useful for him" gandhi apparently found him a husband and a situation, with mahadev desia, his personal secretary. The journey from gandhi to work again in January 1937 remains highly symbolic of the action of Mahatma in India, and an important episode of his life. Indeed, a few years earlier, in 1925, gandhi had been denied access to the shrine of the temple of work, having been allowed only to go around.

"I was not allowed to go to the inner sanctuary because I had gone to angleterre," gandhi complained in an article in his Navjivan newspaper entitled "darshan of Kanyakumari (29 March 1925). Indeed, going abroad was considered a taboo by the Hindus of the time and those who violated this belief were denied entry to the temples. These people could not enter the shrines until they had performed purification rituals.

In 1933, the king of travancore sree chithira thirunal balarama varma ended these restrictions imposed because of travel abroad or other so-called impurities. In January 1937, the king invited gandhi as a special guest for the historic ceremony to the working-class temples which finally opened its doors to all Hindus, including those of the lower castes. Finally, the name fischer mentioned may refer to the journalist louis fischer who had been invited by gandhi to spend a week with him and who remains one of his most famous biographers.

Consult our manuscripts The Autograph Gallery of Centuries specializes in the sale and expertise of autograph letters and manuscripts of the great personalities of past centuries. Purchase / payment methods we accept the following methods of payment: transfers and bank cheques. The prices shown are in euros and are net.

We can also ship by private carrier at your request. Conditions of sale in accordance with the practice of the international league of the ancient bookstore, we accept a guarantee of return within 14 days. The return costs are borne by the buyer. About all the pieces proposed are originals whose authenticity we guarantee.

Our invoices serve as proof of authenticity of the parts sold. However, at your request, we may establish a certificate of authenticity, in addition.

This item is in the category "books, bd, magazines\old books, collection". The seller is "juniennn0" and is located in this country: en.