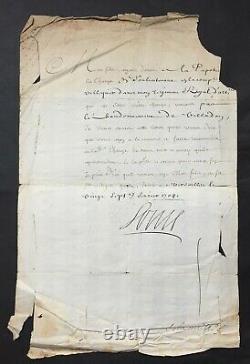 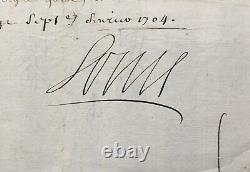 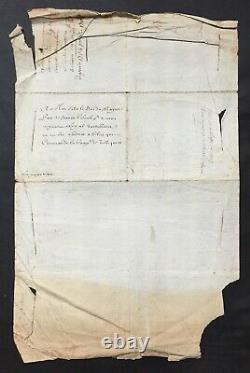 Louis xiv king of France signed letter to his son the Duke of Maine 1704. Its reign of 72 years is one of the longest in the history of Europe and the longest in the history of France. Rare letter signed "louis" (secretary), addressed to his son Louis-Augustus de Bourbon, duke of the hand, countersigned by the war minister michel chamillard, 1page in folio, versailles, February 27, 1704, address on the back. Light missing in the upper right corner.

"My son, having given to the papotière the charge of supporter in my Royal Artillery Regiment which is under your charge, I write this letter to you to tell you that you have to receive it and to make it recognized in this charge of all I pray to God that he will have you my son, in his holy and worthy custody." On the back is the address "to my son the duke of the hand, pair of france, colonel of my Royal Artillery Regiment". At the same time minister of finance and war, he had to face the financial crisis of 1709 and the war of succession of spain.

The item "louis xiv king of France letter signed to his son the Duke of Maine 1704" has been on sale since Saturday, November 6, 2021. It is in the category "collections\letters, old papers\autographs\historical persons". The seller is "*epistole*" and is located at/in bets.