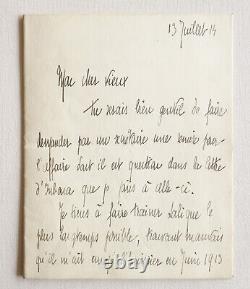 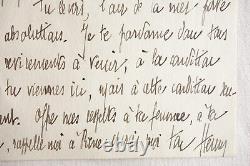 Long letter to his "old boy" Henry lémery, in which he invites his friends to spend a few days on the seashore and, following the reading of the biography of madelin louis, draws a parallel between the latter and briand aristide. You'd be nice to have a secretary ask for a discount on the case that's mentioned in the letter... That I'm joining this one.

I want to make lalic as long as possible, finding it bad that he sent me the usher in June 1913 because I still owed him 1000 francs on a bill of 3000 that dated from January. What will become of us, old righteous and parsimonious, if we tolerate such rapid demands? Come here, old man, come here.

You'll have a bed, and maybe a bedroom, and a whole beach for you, a whole beach of fine sand, and the most peaceful and wide seascape. No other house on the horizon than the one where you're staying, no other living than those you're used to. Seven hours of travel to the end of the earth, is it too much to ask, to parliamentarians to whom travel costs nothing? Come in early August, will you?

Call me on Wednesday or Thursday to tell me where, and so we can have lunch together because I'll be a widower. I'm going home to robert's betting. I'm going to stay with him for two weeks, my whole house being here. You can't imagine how many of the crates we released on our arrival were the furniture we transported.

I mean, it's starting to get better. I'm bathing, I'm fishing shrimp, I'm sleeping on the sand and I've just finished the loyal book of madelin on madelin. From the first to the last page, it makes you think of briand. You know they were born a few miles from each other, mad and bridal. How many features appear to them, even physical ones! Both of them would have coughed their whole lives, also threatened with the chest. And they would have both...

Tossed their convictions one after the other, called "relegates", from left to right, which did not prevent them from seducing from right to left all parties. Their popularity will have been of the same order. Fouché had had two thousand people shot, he reassured the bourgeoisie and pleased the Count of Artois, and the Faubourg Saint-germain, eternally masochist, placed his trust in him, as the... Briand did not have anyone shot, but it is a coincidence. When he was campaigning with a pelloutier, he was redr than a bunch of swimmers.

And when he "broken" the railway strike, he made the police like the minister of the police of napoleon. And yet both would have deserved a great destiny by the quality of their common sense, by an instinct of great business, a feeling of French continuity, a concern to establish an average between the parties and the regimes that redeems the versatility of these souls on a day-to-day basis. And then, maybe it's a strength for a stateman to be inconsistent like a people.

You see, the air of the sea carries with it absolutions. So I forgive you for all your changes to come, on the condition that you come here, but only on that condition. Give my respects to your wife, to your daughter, remind me of stone and believe me your Henry. To see in our shop, other documents concerning henry lémery and henry de jovenel. This item is in the category "collections\letters, old papers\autographs\historical persons".

The seller is "en_quete_du_livre" and is located in this country: en. This item can be shipped to the following country: france.