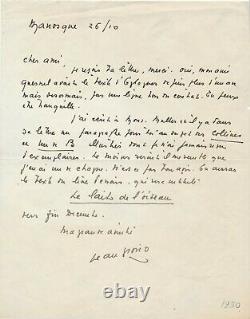 Signed autograph letter addressed to the sculptor eugene-henri duler (19021981). Manosque, " 1930" (year added to pencil). His quesnel friend (Joseph quesnel editor) has had the text of eglogues for more than a year.

"but now, not a line out of the contract. Malles and in the letter there is a paragraph that concerns him about the hills and one of b.

(one of the baumugans) illustrated "from which I never received copies. The least I think would be that I have one of each. Don't you think so.

" "You will have the text of the book tomorrow, which will be entitled the milk of the bird towards the end of December". With the milk of the bird, Giono evokes his autobiographical project "I wanted in this book to explain my literary formation and what may later be called my philosophy", a letter to brown louis quoted by robert ricatte in pleiade, ii, p. Complex project whose genesis dates back to 1928 and which eventually became blue jeans (1932). The item "jean giono à eugene-henri duler letter autograph signed the milk of the bird" has been on sale since Monday 28 June 2021. It is in the category "collections\letters, old papers\autographs\others".