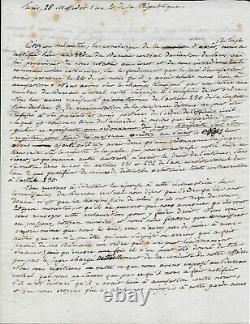 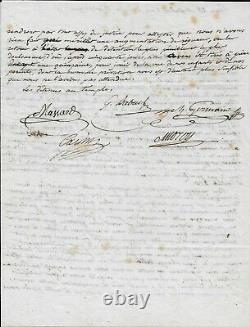 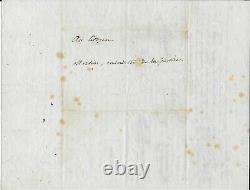 Gracchus Babeuf (1760-1797), French revolutionary. Autograph letter signed and cosigned by hand, cazin, moroy, massard, members of the conjuration of the egals, to the Minister of Justice of the Executive Board, merlin de douai. Paris, 28 Messidor lan 4 of the Republic (16 July 1796); 2 pages in-8°, address of the recipient on the fourth page. A few scattered light foxes. Beautiful letter rich in content on the difficult conditions of detention of babeuf and his accomplices, following their arrest on denunciation on 10 May 1796.

It will be executed one year later on 27 May 1797. The concierge of the temple arrest house informed us yesterday of an order from the central office of the canton of betting, which ordered him to restore us to secrecy and to prohibit us from communicating outside, on the basis that the indictment court had pronounced on the 24th of this month that there was a charge against us. We have on the spot testified by letter to the members of the central bureau, our surprise at the occasion of this order. We represented him that at the end of section 230 of the constitution of lan 3.

The representation of the detained person may not be denied to his relatives and friends carrying the order of the civil officer, who is always obliged to grant it, unless the guardian or jailer represents an order of the judge, transcribed on his register, to keep the arrested person incommunicado. We added that there was therefore only one order of the judge, transcribed on the register of the jail, which could authorize our incommunicado detention, and that no other authority had the right to praise, without in the case of articles 231 and 232 of the constitutional act of lan 3, which described any violation of article 230 as a crime of arbitrary detention. We are currently following the response to this complaint. The commissioners of the central office tell us that the order they gave is only the transmission of the one they received from you, citizen minister, and that they can only announce to us that they will return this complaint to us in order to accept it. We urge you, citizen minister, and we flatter ourselves that knowing the laws even better than we do, you will have no difficulty in recognizing that it could be only a surprise or mistake that caused from your offices an order that was not legitimately emanating, and then once again it can be given such as by the judge currently in charge of the conduct of our case. We will repeat to you in addition to what we have exposed to the central office, that we know only by what he has notified us if it has been declared that there is a need for accusation against us, and that we believe that the persons in charge of our custody will give us enough justice to attest that we have not done anything that deserved an increase of rigour, or the return to the most painful and painful state of detention; from which, after fifty days, we have been pulled barely for fifteen to enjoy the sight of our children and our parents, whose new deprivation is all the more sensitive to us than we had expected. The letters of babeuf gracchus are of great rarity. Having to work underground, following the promulgation of his theses in favor of legality and the collectivization of land, which are not of the taste of the conventional, he found himself first imprisoned in arras, on the 19th rain year iii, but recovered freedom, thanks to an amnesty law voted on the 26 vendemiary year iv. The repression, which is reflected in the closure of the Jacobin club, obliges him to act in hiding by creating, together with his accomplices, the conjuration of the equals, made up of an executive board of which he takes the direction. Its purpose is to implement the constitution of lan i, consisting of a declaration of human and citizen rights supplementing and replacing that of 1789, never applied by robespierre, and to achieve the collectivization of land and means of production, in order to achieve "perfect equality" and "common happiness". Chassed by lazar carnot, member of the Executive Board, babeuf and his accomplices are denounced by an indicator. They were imprisoned at the temple prison on 10 May 1796.

After two attempts by his supporters, for their release, aborted, they were transferred to the vendome prison, far from betting, for trial. In this letter of 16 July 1796, Babeuf asked for the clemency of the Minister of Justice, Merlin de Douai, who, in the face of the popular repression of his sympathizers, had tightened the conditions of detention. Babeuf asked him for the right to see his family, in accordance with Article 230 of the Constitution of lan 3, implicitly reminding him that the constitution of lan i had never been applied by the gowns.

The trial opened at vendome on 20 February 1797 and ended on 26 May. On the statement of his death sentence, babeuf tries to commit suicide. He is guillotined, dying, the day after the sentence. The item "gracchus babeuf letter autograph signed French revolution" has been on sale since Monday 6 September 2021. It is in the category "books, bd, magazines\old books, collection".