George Sand Signed Autograph Letter. The Berry And The Mare To The Devil. 1847 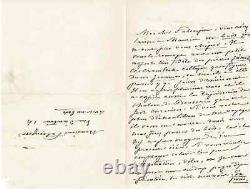 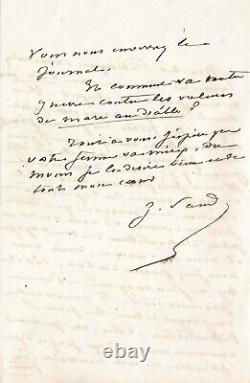 For many years, the autograph library has specialized in the sale of autograph letters and manuscripts. Signed autograph letter to Jean-Gabriel Falampin. Autograph address on the fourth sheet. "And how is our war against the thieves of pond to the devil? George sand evokes his berry lands and one of his most famous works.

"My dear falampin, you had left to maurice. [Mauritius son sand] a wood he doesn't want to screw you with. It returns it to you with a very faithful little aspect of the jomatre stones, this Celtic cromlech that appears in jeanne, and where it was passed. He took several views of it and he also copied the tapestries of the château de boussac which are very curious. If you want more samples of his trip, he'll send you some.

But you'll pass us some woods, because there's no way to get them here. If you want to use this one for illustration, say, and I'll send you one or two pages of explanation, if it's necessary. [Berrichonne expression meaning "in reward"], you will send us the newspaper. And how's our war against the mare thieves to the devil? Everything to you, I hope your wife is better, at least I want it well and with all my court. A lawyer, Sunday painter, he founded with Jean-Baptist-Alexandre Paulin the illustration of which he assumed the artistic direction. The woods mentioned here by george sand are the matrices of the engravings published in his journal, published on July 3, 1847, and to which George sand contributed by evoking his berry. George sand also evokes the jomatre stones, near the castle of compass and the then unknown chief of work that was housed by the castle: the famous tapestry of the lady with unicorn, now the centrepiece of the collections of the museum of cluny à paris.

Jômatre stones were considered by Sand and his contemporaries as stones raised by Gauls for their worship and were objects of fascination. They constitute the theatre of the jeanne novel written by the letter woman in 1844, where they are described as such: "These blocks laid like gigantic mushrooms on their narrow base are the menhirs, the dolmens, the cromlechs of the ancient Gauls, remains of cyclopean temples... Terrible altars where prisoners and slaves were killed to appease the fierce deities. In the end of the letter, George Sand asked his confessor about the "war against the mare thieves to the devil"; in the absence of war, it was his lawsuit against the society of the people of letters, which had illegally sold the right to reproduce his famous novel, causing serious harm to the author and his publisher. Sand won this trial, after various adventures, in 1849.

About the trial, see the Lubin correspondence. Unpublished letter to the correspondences of Georges Lubin (garnier) and thierry bodin (gallimard). Consult our manuscripts The Autograph Gallery of Centuries specializes in the sale and expertise of autograph letters and manuscripts of the great personalities of past centuries.

We can also ship by private carrier at your request. Conditions of sale in accordance with the practice of the international league of the ancient bookstore, we accept a guarantee of return within 14 days. The return costs are borne by the buyer.

About all the pieces proposed are originals whose authenticity we guarantee. Our invoices serve as proof of authenticity of the parts sold. However, at your request, we may establish a certificate of authenticity, in addition.

This item is in the category "books, bd, magazines\old books, collection". The seller is "juniennn0" and is located in this country: en. This item can be shipped to the following country: whole world.