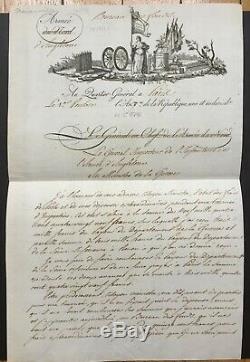 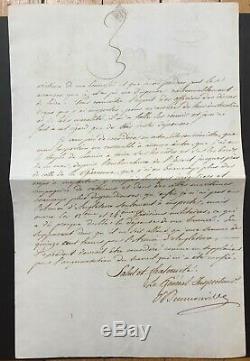 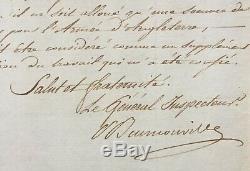 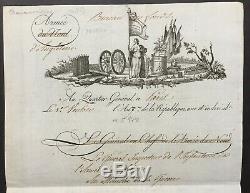 General Beurnonville - interesting autograph letter signed addressed to the Minister of War. Pierre Beurnonville of riel, general French revolution and empire, and Marshal of France restoration. He will order the army successively of Luxembourg and the Moselle, the army of the north, the army of Holland.

Bonaparte appoint minister in Berlin. Large 2-page letter, 1st Ventose year vii of the republic, while Beurnonville is inspector general of the infantry of the army of England (words \Letter to Minister of War, the headquarters in Paris.

Interesting letter which stands Beurnonville accurate inventory of postage and extraordinary expenses of the army and its financing, essential that tormented the revolution and the state, ruined. I ask you to consider, in addition, citizen minister, my inspection is like no other I had the triple way to go on the coast and on the banks of the sea from the mouth of the Scheldt to near that of the garonne, I had a lot more body to be inspected, including irregular bodies and companies of veterans, and in cities ... That, finally, I have not had the army of England only inspect but also the 12th and 24th military divisions. Excellent condition - sent by registered mail.