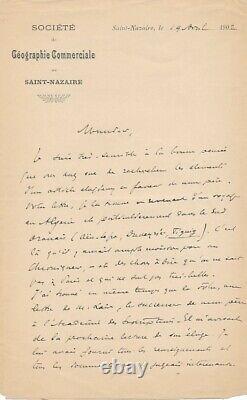 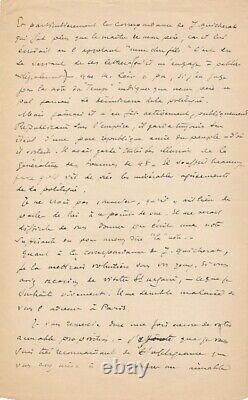 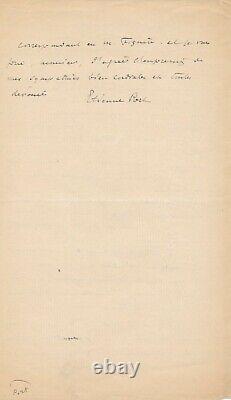 Two and a half pages in-8. Header of the commercial geography society of Saint-Nazaire. An autograph business card is attached.

He thanked his correspondent for sharing his research with him for an article about his father. He also told him that he had received a letter from m. Loir, his father's successor at the enrollment academy, who would give a next reading of his praise. He had given him all the necessary documents.

And especially the correspondence of J. Quicherat who was more than my father's master by calling him. Is by using these letters (which he commits me to publish in full) that Mr. Loir could, if I judge by the note of time, indicate that my father could never disinterest himself in politics. He specifies his father's political commitment.

But never, he did it actively, publicly. A republican under the empire, he always kept his ideal of a young republic friendly with the people, from where he came out. He had kept all the illusions of the generation of men of 48.

He suffered a lot because he saw the wretched actions of politics closely. Do not, however, wish to write a note on this subject and speak on his behalf. Etienne port seems to have the same commitments as her father. He mentions his return from travel in Algeria to the south of Ora (a. Is there that there would be ample harvest for a chronicle - and things to say that we do not know to bets and that are not very beautiful.

Historian combatant, celestine port still remains one of the great names of anjou. (elisabeth verry, director of the departmental archives of maine-et-loire). This item is in the category "collections\letters, old papers\autographs\historical persons". The seller is "christophe6584" and is located in this country: en. This item can be shipped to the following country: whole world.