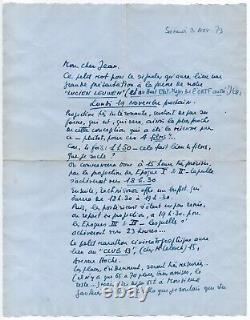 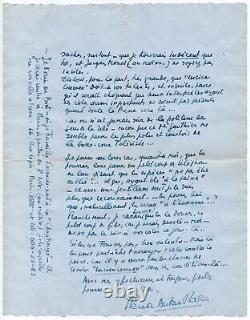 Signed autograph letter addressed to the actor jean martinelli, bets 3 November 1973, 2 pages in-4, traces of folds, rough edges at the top and bottom. "This little word to point out to you that a great presentation will take place to the press of our "lucien lewen" and to the upper etat-major of Ortf too! Very interesting projection, especially because of its shape, which is, which will be, so the closest to this conception that was mine for this - rather, for these 4 films!because, 4 times: 1h50 - that makes 4 movies, as I know? This small film marathon will take place at Club 13 at Mr.

The seats, of course, will be very tight... There are only 65 to 70 well-seated seats, the rest... But I already told Mr Gauthier - and that's what I wanted you to know, especially - that I would find indecent that you, and jacques monod at least... First, for the very big part, that "lucien lewen" owes to your talents, and then, because it would be shocking that two performers with such important roles are not present when the entire press will be there... Director, among other things, of the red inn with fernandel, of the crossing of bets with jeans gabin, bourvil and louis of funes and in case of misfortune with jeans gabin and brigitte bardot, claude so much lara figure in the pantheon of French cinema.

He had made himself a speciality to adapt to the cinema of masterpieces of French literature such as the devil to the body of raymond radiguet, wheat in colette grass, and of course red and black, in 1954, of stendhal, with girard philipe and danielle darrieux. The adaptation of the lucien leuwen of the same strendhal was intended for television and was broadcast in December1973 on the second channel. It was a series of 4 episodes of 100 minutes each.

Careful packaging, recommended shipping with ar. This item is in the category "collections\letters, old papers\autographs\historical persons".

The seller is "galerie_jbm" and is located in this country: en. This item can be shipped to the following country: france.