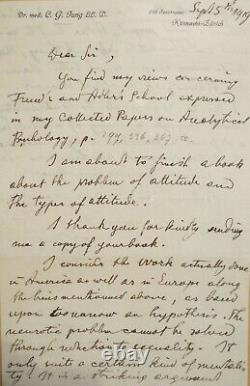 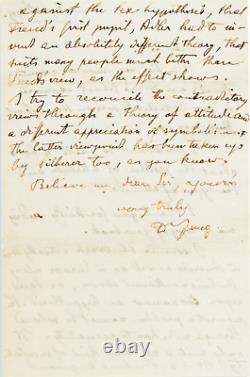 For many years, the autograph library has specialized in the sale of autograph letters and manuscripts. Autograph letter signed "Dr Jung" to psychoanalyst andré tridon. Two pages in-8° in English, on paper at his header dr. The neurotic problem cannot be solved by reducing sexuality. Remarkable letter from the Swiss psychiatrist dissociating himself from sexual theories developed by freud, explaining his own understanding of libido, and specifying his ongoing work on psychological types and symbolicism. "Dear sir, you will find my views on the school of Freud and Adler expressed in my book. Collected papers on analytical psychology. I am about to finish a book on the problem of attitude and types of attitude. ["psychological types", originally published in Germany in 1921]. Thank you for kindly sending me a copy of your book. I consider that the work currently carried out in america, as well as in Europe, as mentioned above, is based on an overly narrow hypothesis. This can only suit a certain type of mentality. It's a crazy argument against sexual theory. [of sigmund freud, developed in 1905 in his book "three essays on sexual theory"], so that the first student of freud, adler, had to invent an absolutely different theory, which suits many people much better than the vision of freud, as the results prove. I try to reconcile all these contradictory points of view through an attitude theory and a different appreciation of symbolism. The latter point of view was also taken up by the Committee. [Herbert] Silberer, as you know. Believe me, dear sir, yours very sincerely, dr jung.

We know that jung was one of the first followers of sigmund freud. Nevertheless, as soon as his libido metamorphoses and symbols were written in 1909 (published in 1922), Jung knew that this initiative would mark the rupture of his friendship with the father of psychoanalysis. In fact, the latter, wounded, immediately considered the jung's opening as a will to "desexualize" the libido and a clear attempt to "kill the father". The deterioration of their relationship actually began in 1911, during the congress in Weimar.

Freud suspecting jung (not much available for the international psychoanalytic association of which he was then the president) to want to create his own psychoanalytic movement. The rupture between the two men quickly proved definitive and was endorsed by the jung theories on the collective unconscious and the publication of his work, in 1912, metamorphoses of the soul and its symbols. Freud denounces heresy, and now considers jung as a dissident, such as alfred adler (founder of individual psychology, mentioned in our letter) at the beginning of the psychoanalytic movement. In August 1913, as to formalize this rupture, Jung briefly presented at the xvii International Congress of Medicine in London, his new approach which he called analytical psychology, distinguishing it from Freud psychoanalysis.

Jung suggests releasing the psychoanalytic theory from his "exclusively sexual point of view". This conference is a fatal blow to the relationship between the two men. Freud, in his letter of 27 October 1913 - the last between the two men - confirms the rupture: "Your allegation, like what, I would treat my supporters as patients is obviously false (.) Therefore, I propose that we abandon our personal relationships completely. Dear Sir, you find my views concerning fraud's and adler's school expressed in my collected papers on analytical psychology, p.

I thank you for keeping sending me a copy of your book. I consider the work currently done in americana as well as as in Europe along the lines mentioned above, as based upon too narrow an hypothesis. The neurotic problem cannot be solved through reduction to sexuality. It only follows a certain kind of mentality.

It is a striking argument against the sex-hypothesis, that freud's first pupil, adler had to invent an absolute different theory, that follows many people much better than freud's view, as the effect shows. I try to reconcile the contradictory views through a theory of attitude and a different appreciation of symbolism.

The letter viewpoint has been taken up by silberer too, as you know. Believe me, dear sir, yours very truly dr jung. Consult our manuscripts The Autograph Gallery of Centuries specializes in the sale and expertise of autograph letters and manuscripts of the great personalities of past centuries.

Purchase / payment methods we accept the following methods of payment: transfers and bank cheques. The prices shown are in euros and are net. We can also ship by private carrier at your request. Conditions of sale in accordance with the practice of the international league of the ancient bookstore, we accept a guarantee of return within 14 days.

The return costs are borne by the buyer. About all the pieces proposed are originals whose authenticity we guarantee. Our invoices serve as proof of authenticity of the parts sold. However, at your request, we may establish a certificate of authenticity, in addition. This item is in the category "books, bd, magazines\old books, collection".

The seller is "juniennn0" and is located in this country: en. This item can be shipped to the following country: whole world.