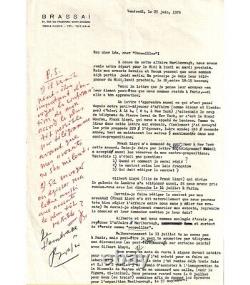 Brassai (pseudonym of gyula halasz). And "brassai" to "my dear leo, dear "advisor", with an autograph postscriptum with red pen and some autograph corrections.

Brassai asks for advice on contracts to be signed with the malborough gallery. I was waiting for the stone phone call raised from new-york, but it was the great guru, Frank Llyod who called us from London. As you will read in this letter to the lawyers, finally, I accepted the proposed awards... Frank llyod asked me to confirm to new-york this (sic) agreement. Do I have to do it by letter or telegram? He also accepted the reservations of my counter-proposals... Gilbert llyod (son of frank llyod) who runs the London gallery also phoned me. And we made an appointment with him on. Should I have my lawyers write the contract? (Frank llyod naturally told me that we can very well settle the matter between us without involving lawyers).

Or should I just thank my lawyers, take back the file and ask them how much I owe them. Gilberte and I were relieved to have been able to catch up with the malborough affair and above all to have you as ".

We have a bill of sale to sign in front of a notary for a bristol room that I bought to make it a laboratory. On July 2, I promised to attend the inauguration of the men's biennial where I was dedicated a hall. We expect to return (sic) on July 8 for two or three? Weeks in order to give the tests for the malborough exhibition, on September 17..

1 it may be important to send confirmation of my agreement as soon as possible by telegram before my lawyers get involved. 2 and send or deposit my letter also to lawyers as soon as possible? the fine art marlborough was first founded in 1946 in London by frank lloyd and harry fischer, before the opening of a gallery in new-york in the 1970s. Brassaï exhibited his photographs several times in the New York gallery (notably in 1974 and 1976).

This item is in the category "collections\letters, old papers\autographs\historical persons". The seller is "bibliolibrum" and is located in this country: fr. This item can be shipped to the following country: france.