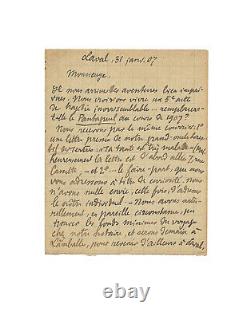 Autograph letter signed "alfred jarry" to alfred valette laval, 31 Jan [19]07, 4 pp. A long, largely unpublished letter marked with absurdity and upuesque vocabulary, in which jarry announces the death of one of her aunts. "Monsieuye happens to us very unexpected adventures. We'd think we'd live a five. An unimaginable act of tragedy.

Will it replace the pantagruel during 1907? We receive by the same mail: 1° a letter pressed from our great uncle the restive of the terres: "Your aunt is very sick" unfortunately the letter went first 7, cassette street; - and 2°.

Let it go, which we address to you as a curiosity. We have no desire, this time, to address our individual - we have naturally, under such circumstances, been able to find the minimal funds of the trip at our notary's, and will be in lamble tomorrow, to return to laval. As well as our sister, that same evening or Saturday morning, if we are held, which is likely, in the other uncle gorvel.

So our address is still in laval. I have no doubt - unless my last word has gone astray - that you have willingly consented to the collection service (if not, we would like to get the "command" paper back as soon as possible to notify from here). It will be difficult for us to save on the slamming trip, but the retours rue de bootz are better than we thought (our presence serves a lot). That will be 40 instead of 30 this week, of which 5 were affected yesterday.

The provisional situation is therefore not so bad. It is strange how physical health is intimately linked to the health issue. We are increasingly persuading ourselves that even last summer we were not ill. Today - forgiveness of detail! - He's pushing us away, monsieuye!

Hair on your arms and almost in your hands, almost one inch a day! If it continued, it would never be 3m65 a year - the width almost of the tripod, to which m. Dubois granted 3m69 - but you have to be satisfied with little, and it is largely, if not sufficient, at least suitable. We cannot glorify you too much that - [the magazine] sing light helper, of which sing light alas! If I judge by the silence of franc-nohain, we will never see anything else - you allow us to appear tomorrow in lamble other than the great capeline.

Old Bretagne families are all the easier because they have more bottles, but. My cousins will have that a luxury, which would delight Madame Rachilde, the horses, not to go to the cemetery of course but to return to their respective tripod: the beasts coupled from the hall, st mirel (brother of late my aunt), motte-colas are famous in a region. It is remarkable that our aunt died at the age of 70, while our uncles on one 85 and the other 86 and are doing wonderfully, it is we are delighted as well as our precious longevity to ourselves, which must be considerable if we judge by the number of times that we are uncle in the style of bretagne thanks to the Brav' cap'taine morinière: alternatively a nephew, niece, one or one per year for 8 years, it does not rejuvenate us!

Well cordially, monsieuye alfred jarry". Alfred jarry used to use the vocabulary of his play ubu roi in his correspondence with alfred valette, who was director of the mercury of france (he has frequented since 1896 the valette phanaster located in corbeil, near the seine, where Sundays are the place of meals between people of letters).

Towards the end of his life, alfred jarry will become more and more like his character, speaking like him. It was during 1904 that jarry decided to buy, in front of notary, a small land to build his own holiday home and ordered the carpenter dubois, a cabin of 3.50 m side mounted on four feet, called the "tripode" because resting on four feet. On the basis of a estimate of one thousand two hundred and twenty francs, he owed another one thousand two hundred and eleven francs to the carpenter on the day of his death. Alfred jarry came there only on rare occasions, his ill health forcing him to take refuge in the laval at his sister's house and the cabin was finished eighteen months before his death.

The "memory of the works carried out on behalf of Mr Jarry, owner", was sent by the dubois charron in 1906, specifies that the package was 3 mothers 67 by 3 meters 33. The formula used by jarry on the magazine chanteclair suggests that, in the absence of publication, it was somewhat compensated for its costs.

As a result of this missive, jarry travels the next day to lamble on the occasion of the sudden death, a few days earlier, of his left-handed great-aunt of the terres. 643-644 (letter partially transcribed with errors).

Librairie sanit-faure, drouot from 14 to 17 June 1954 (library of an amateur, no. This item is in the category "collections\letters, old papers\autographs\others". The seller is "laurent-autographs" and is located in this country: fr.