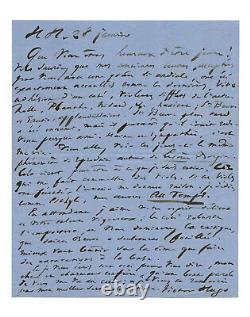 Autograph letter signed " victor hugo " to a critic January 28 [1870], h[auteville] h[ouse], [guernesey], 1 p. In-4 small central tear on the fold on the right margin. Extraordinary unpublished letter about the critical reception of his works and his way of accomplishing them. How happy you are to be young! You would know that my old works, accepted by you with such cordial grace, were exactly welcomed as the last, strong adhesion on one side, violent whistles on the other. [hyppolyte] rolle, [gustave] plank, [charles] nisard etc. Huet ; steuve and [theophile] wautier applauded. Ste-beuve later was an enemy, but it seems he'd be almost back to being a friend. Hate and sympathy is my life. You will see these days the same phenomenon reproduce around lucrèce Borgia.

Maybe it's because I'm whole. Which makes me commit rape.

If these rapes have fertilized, the future will make me right. I dedicate, like eschyl, my works in time. In the meantime, I love your delicate spirit and your vigorous talent; the robust side will prevail, and you will dominate the criticism, which Saint-Beuve has only searched.

It is better to build on the top than to do excavations at the base. And I write to you all this to tell you, my dear and charming colleague, that a good word from you goes to my heart; and I thank you for it with my best hand shake.

Lucrece Borgia is a play written by victor Hugo in 1832 and represented in the theatre of the porte-saint-martin on February 2, 1833. The oeuvre was a great success to the point that donizetti drew an opera that same year. During a private reading to his knowledge, the playwright meets for the first time juliette drouet. Lucrece Borgia will, as Hugo states in this letter, be replayed on 2 February 1870, still in the theatre of the porte-saint-martin.

Hugo spoke at length about Saint-Beuve because he, a prominent literary critic and representative of Romanticism (notably, the two men will maintain relations marked by admiration and rancour), was to die three months earlier, on October 13, 1869. The dedication of eschyle to time is a quotation from the preface of the burgraves (historical drama of victor hugo represented for the first time in the French comedy on March 7, 1843). This item is in the category "collections\letters, old papers\autographs\others". The seller is "laurent-autographs" and is located in this country: fr.