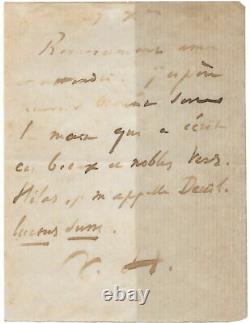 Victor Hugo (1802 - 1885), French writer. Autograph letter signed from his initials. 27 December (1873); 1 page in-12°. Insolated letter on the left half, ink slightly erased by place. Beautiful and moving letter full of suffering from a father who mourned the death of his French-Victor son, who died of tuberculosis on 26 December 1873: "Thank you moved and tender I hope soon to be able to shake the hand who wrote these beautiful and noble verses. Alas, my name is mourning. "Unfortunately, my name is mourning. The life of victor Hugo, well lit with glory, was also the tragedy of a father who never recovered from the tragic death of his pregnant leopoldine daughter on September 4, 1843. So what had gone with her husband, charles vacquerie, to take a sail on the seine, victor hugo was, during that time, in love escapade in spain with his young mistress juliette drouet. He suddenly learned the drama in the newspapers.

He expiated his suffering by writing, one of the most beautiful illustrations is his poem "morrow from dawn" which expresses all the suffering of a father bereaved. Later, on 13 March 1871, he lost his eldest son charles, who died brutally of a burgundy apoplexy, as he went to join him in his fiacon at the restaurant.

Then two years later, his second son, François-victor, died as a result of tuberculosis at the age of forty-five. François-victor had launched two newspapers of political controversy with his brother and father. He later followed his father into exile after the coup d'état of Bonaparte Napoléon Louis.

He is the author of famous clichés of his father and his entourage of that time. Only the last one, adele, survived him.

Yet his life was a tragedy. After a huge failure in love with Albert Pinson, met at Guernessey, whose father did not want to hear about, she sank into a serious depression assimilated to madness. Victor Hugo, after the death of his first three children and his wife, resigned to intern adele in 1872.

She remained locked up until her death in 1915, her internment lasted 43 years. The item "victor hugo letter autograph signed death of his son françois-victor" has been on sale since Friday 9 April 2021.