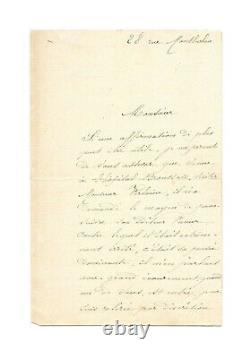 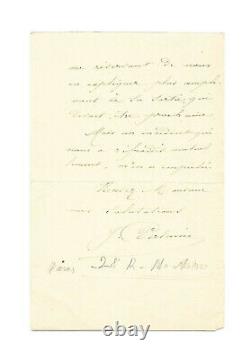 Verlaine to a gentleman (probably edmond lepelletier) rue montholon [paris], circa 1889, 2 pp. In-8 on tiny bifeuillet lacks in the lower right margin without affecting the text.

Letter from the enigmatic jeanne who ensured that he had a kinship with verlaine, about the famous scramble between him and vanier. If one more statement can be useful, I can assure you that, coming to the hospital, came to visit Mr. Verlaine, he asked me the way to pursue his vane publisher against whom he was extremely irritated, it was his dominant thought, he spoke about it with great cleanness, when one of you entered, I withdrew by discretion reserving myself to explain to you more about it at his exit, which was to be forthcoming. But an incident that cooled each other prevented me from doing so.

This person in question was a lady who said that she was a relative of the poet, whom she met in Brussels in 1889, at the time when she was hospitalized herself (the episode mentioned in the letter is that of the verlain jam with vanier, following an insert attached at the same time as the unknown of the poet). Since Verlaine was in a row from July 8 to August 18, 1889, the letter should be dated accordingly. Verlaine mentioned this person a few times in his correspondence from August to September 1889, the appellant sometimes J. ", sometimes " likes my homonym (letter to Cazals of 26 August 1889). According to georges zayed, she would be the dedication of a poem of dedication 2nd ed.

", a second version of which is entitled "a mme jeanne", which gives, at the same time, the key to "j". We thank olive bivort for its help in the completion of this sheet.