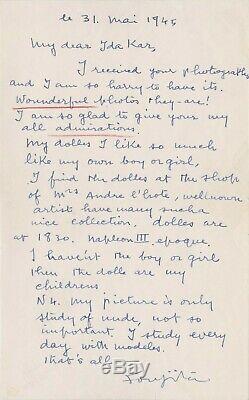 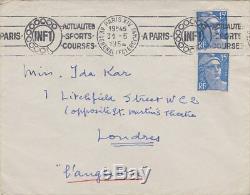 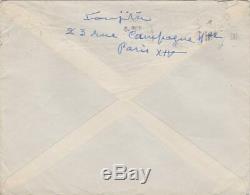 Autograph letter signed ida kar. Autograph letter signed, Paris, May 31, 1954, ida kar. He congratulates her wonderful photos he admires. It also explains his attachment to its collection of dolls, bought in the shop mrs. Andre the host, \He continues to movingly: \The artist has signed a second time on the back of the original envelope is preserved.

Living in the artistic neighborhood of Montparnasse, foujita, who left Japan to continue his career in Paris, has forged friendships with modigliani, light, Picasso, Matisse or dancer isadora duncan. His bohemian friends, he was the first to install a hot water bath and models often had a bath and ask for him. He also produced several portraits of the companion of man Ray, Kiki of Montparnasse, the lying naked on the toile (now in the Museum of Modern Art of the City of Paris), which was one of works headlights dautomne 1922. Seating in 1931, he traveled through south america before returning to Japan in 1933. During World war II, he produced propaganda in favor of war for his country.

He returned to Paris after the war and became French citizen in 1955. The dolls and puppets are subjects of foujita favorite, whose art combines Japanese and Western painting styles. Born in Russia and raised in Egypt, ida kar evolved into the avant-garde circles while studying in Paris in the 1920s Over the next two decades, she led a photography studio in Cairo and was involved in the Egyptian surrealist movement. After marrying victor musgrave, officer of the Royal Air Force, British poet and art dealer, she moved to London to make a name in the field of portraiture.

In 1954, she realized a foujita photography with several dolls whose novelist Bill Hopkins said \-delà of all human beings. \It is surrounded by them; many of them are antique curiosities. My dolles i like so much like my own boy or girl, i find the dolles at the shop of mrs. Andre the host, well nown artist-have Such As Many nice collection. I have not the boy or girl Then The dolle are my childrens.

My picture is only study of nude, not so important. I study every day with models. Ida Kar 1 Litchfield Street wc2 opposite st.

This is an authentic letter. This letter was accompanied by a fact sheet including a transcript. Bills and cards we issue taken as a warranty certificate. France free shipping Private carrier on request.

Shiltonson autograph letters & historic documents. The item \The seller is \This article can be shipped worldwide.