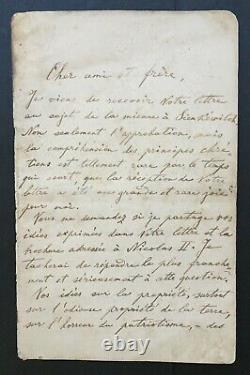 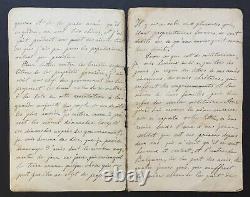 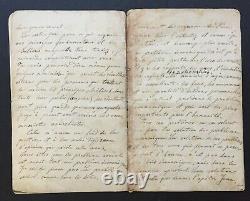 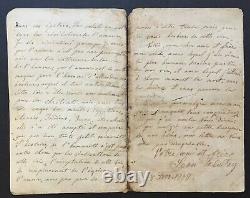 Important signed letter addressed to the journalist Sergezimaco. Yasnaya poliana, February 8, 1908. The letter is written by the hand of sofia andreevna tolstoi (the writer's wife), with a sentence and the autograph date and the signature of leon tolstoi "your friend and brother leontolstoy" at the end of the letter.

Autograph note by serge zimaco at the back of the last page "and comforted me with the many difficulties that I experienced from some French journalists, wanting to expose in their sheets and defend the true doctrine of jesus-christ". Leon Tolstoi responded to the letter of the French-Polish journalist Serge Zimaco of 1 February 1908, and expressed at length his views on landownership, the patriotism of war, the social problem, Christianity and love. You ask me if I share your ideas expressed in your letter and the brochure addressed to nicolas ii. I shall try to answer this question as frankly and seriously as possible. Your ideas about property, especially on the greedy property of the earth, on the horror of patriotism, -the wars and armed peace that it generates, are very dear to me and for a quarter of a century I did everything I could to popularize them as much as possible.

In order to combat the terrible superstition of the landowner, I wrote to the head of government proposing the fine role of putting at the head of this restitution to the great majority of the people, of its most sacred rights. I would like to reiterate the same approach. With regard to militarism, I am happy to say that every day I receive letters from my unknown friends, true Christians, who suffer the imprisonment and misery of their families, for refusing military service. So, as far as your fundamental principles are concerned and the results to which you seek, I completely coincide with you. I think I can even say that a few small results are obtained by the people who try to follow Christian principles in their full scope (scale), these results are greater than those to which the anarchist communists have so far arrived.

This brings us to the bottom of the question and to the only difference of opinion between us. You say that the social problem is above all an economic problem. I don't think so. The social problem, as you say, the advent of the kingdom of God as you see it and as I hear it is much wider. The economic problem is just a very small part of the circle.

There are gender relations, the education of children,nationalities, how to act towards the assailants, the madmen, the animals and a lot of personal actions that are not part of the economic problem, and which are the most important for humanity. Not all of these problems can be solved by solving the economic problem.

The solution of these problems and of all those who can pose before man is not in economic laws, but in the spiritual domain. Their solution is that given by the apostle jean in his epitrets. The solution is in the revelation of love.

I say "revelation" because I believe that love is not a prescription but an inner law of man's life; that love is the only way for man to attain happiness, to which he tendnaturally. This law was revealed not only by Christendom, but by all the wise men of the world: Egyptians, Chinese, Indian, Greek, etc. But it was only accepted and understood by a very small minority.

The history of humanity is not anything other than the progressive realization of this law, the acceptance of this law, the emplacement of legoism through love, not to reward them over and over, but for the true happiness of this life. This, my dear friend and brother, is my creed with which I have the happiest last part of my life, and with which I wait every moment for death, without desire and without being able to fear it. Zimaco requested the agreement of Tolstoi to publish this letter, which the writer refused. The letter was published in the archives of léon tolstoi in 1956 after a copy made by the friends of the writer in the 1900s.

A draft of this letter is also preserved by the museum of léon tolstoi in Moscow. The original letter was kept in the zimaco serge family. The item "Tolstoi léon exceptional letter signed Christianity and property 1908" has been on sale since Friday 11 June 2021.