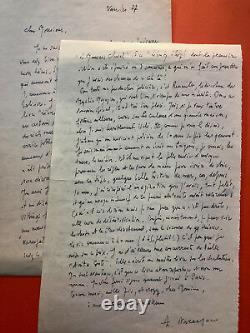 I'll be the policeman for the rest of my life! Two autographed letters signed [with mac-orlan stone] in French, 27 April and 4 May [1954] 4 pp. Important letters in which he evokes his wish to leave the police novel to devote himself to the adventure novel.

Narcejac expressed his fatigue and doubts about the writing of police novels. He also discussed his collaboration with P. Boileau and the numerous adaptations of his novels to the cinema. "I'm not a stranger to you since you wanted to talk a few years ago- about my hero, slim, lman with glass lily, who was so amiot stone. Only I'm starting to get a little tired describing police novels.

It's very natural: I'm a son, a great grandson of sailors! My grandfather had golden rings in his ears! That's why I'm writing to you. My friend Jean Morrin was talking about you last night and telling me what your influence is. However, this Viking prize could allow me, I think, to start a new career because I am terribly marked "narcejac?

Oh, yes, the guy who makes cops! You know what it is.

I knew from my indiscretion that my book is well placed. Support him, that's something. But I didn't fall from the last rain and I know a little bit about the price backstage. I'm leaving without any support, no recognition of? I live very far from betting, I'm likely to be beaten by the pole.

That is why I would like to ask you since you are dealing with a number of authors if you could not monitor the competition a little bit, support my colours, defend my chances as the competitors will probably defend theirs. I think it's a good war. I'm not a price maniac, but I know that this modest Oscar can allow me to do something else. If I miss my shot, I'll change my name, of course, and I'll still write what I like. But it seems to me possible, pleasant and amusing to escape from the publishers who believe they hold me and do it at my head rather than theirs. If my request seems indiscreet or naive, you'll put my letter in the basket. If not, place it there! For the rest, I don't even know which writers are on the jury.

I entrust my interests to you with confidence and ask you to accept, dear sir, with my best memory, the expression of my distinguished feelings. "I thank you for your kind letter, which is for me the best of encouragement. This is exactly my situation: on the police side: collaboration with P. Boileau and contract with denoël. Our novel "the one that was no longer" was bought by nailzot.

(the film is to be shot in July-August) translated into america (what success) purchased by American television, translated everywhere, angleterre, holland, Germany, Scandinavian countries, spain. It has been specified with our 2nd book "the faces of the shadow" also sold for the cinema (saslavsky director, that of "the snow was dirty") if I do not resist success, I am a finished guy!

Romanesque side: contract with Nielsen on easy history books. I mean, nielson has a very defined clientele and, for this reason, he can't follow an evolving author, let's go to the visual genre.

He published my "simenon case" which was a success of prestige and nevertheless did well in English but did not give anything in france. For all my police production, it's renault, the director of mystic magazine, who wants to take care of my interests. In this special area, he is very well placed.

But if I want to try fortune elsewhere, run without the colors of a big house, then I'm terribly isolated. So, as I was telling you, I think a 10-year-old police novitiate is quite enough.

Now I know how to write a book, I know the stuff, the job. And it comes to me the mad desire to send around the rules and the tricks to write chic, with the tripe, some beautiful story of sea, because, for 10 years, I recovered the imagination that I had, very small, and that an intrusive use of abstract thought had restricted! It doesn't leave anything but you swear it's not funny, this detoxification cure. Finally, now I can see the thing and the beings directly, without the help of any theory. Life starts at 40 (at 45, rather) that's why I'm putting this price on.

I also have a competitor of size "anita conti" she writes a master book on trawlers. My only advantage is that this book is a reportage, not a novel.

I will give you a signal when I will bet." The Viking Prize is a prize created in 1927, awarded every 2 years on May 17, Norwegian holiday is alternatively awarded to letters and arts, for works related to adventure and the sea. Thomas narcejac received the prize of the novel adventure in 1 948 for the eastern death of the voyage. The item "Thomas narcejac two signed autograph letters" has been on sale since Sunday, April 28, 2019.

It is in the category "collections\letters, old papers\autographs\historical persons".Dinks" and is located at/in turn. This item can be delivered anywhere in the world.