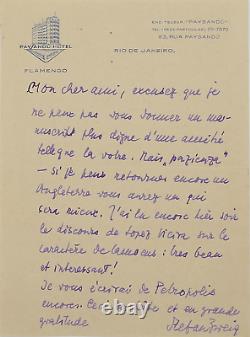 For many years, the autograph library has specialized in the sale of autograph letters and manuscripts. Autograph letter signed to Count Carnaxide. A page in-8°, in French, on letterhead of the peasantdu hotel de rio de Janeiro. "I will write to you again petrópolis. Moving letter from zweig since Brazil, a few months before his suicide.

"My dear friend, excuse me that I cannot give you a manuscript more worthy of a friendship such as yours. But "pazienza" - if I can still go back to angleter you will have one that will be better. I read again last night the speech of lopes will live. [the Portuguese poet afonso lopes will live].

On the character of camoes: very beautiful and very interesting! I'll write to you about petrópolis again.

This is in haste and gratitude. Fleeing the rise of fascism, stefan zweig leftta came in 1934. In contact since 1932 with abrahão koogman, the personality of the Jewish emigrated community in Brazil, he visited the country in 1936, then, after having set himself a time in angleterre, he made a real first stay in Brazil from 21 August 1940 to 21 January 1941, cut off by an excursion to Argentina and Uruguay. He then spent a short period in angleterre and in the United States, before returning to Brazil in August 1941: he then remained in petrópolis, except for two stays in rio in August 1941 and from 15 to 17 February 1942. The Viscount de carnaxide, antónio batista de souza pedroso, represented in Brazil the secretariat of state for the national propaganda of the portugal, led since its creation in 1933 by a close friend of the president antónio salazar.

He had bonded with stefan zweig in 1936, and then gave him important services: he facilitated his installation in Brazil, organized receptions for him, and obtained visas for the American to his first wife. Check out our manuscripts The Autograph Gallery of Centuries specializes in the sale and expertise of autograph letters and manuscripts of the great personalities of past centuries. Purchase / payment methods we accept the following methods of payment: transfers and bank cheques. The prices shown are in euros and are net. All our shipments are made in registered mail with insurance at a flat rate of 10 for France and 20 for the rest of the world. We can also ship by private carrier at your request. Conditions of sale in accordance with the practice of the international league of the ancient bookstore, we accept a guarantee of return within 14 days. The return costs are borne by the buyer.

About all the pieces proposed are originals whose authenticity we guarantee. Our invoices serve as proof of authenticity of the parts sold. However, at your request, we may issue a certificate of authenticity, in addition.

The item "stefan zweig signed autograph letter. One of his last letters brasil 1941" has been on sale since Thursday, June 24, 2021. It is in the category "books, bd, magazines\old books, collection". The seller is "juniennn0" and is located at/in lyon. This item can be delivered anywhere in the world.