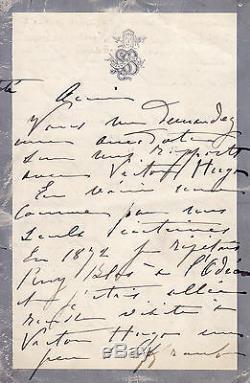 Bernhardt sarah (paris 1844 ¨paris 1923), French actress. Signed autograph letter to (Arthur Meyer). (February) 1905; 4 pages in-8 on monogrammed paper. Sarah Bernhardt tells an anecdote about victor hugo for the \Here is one in 1872 I kept blaming lodeon and I went to visit victor hugo a little bit suffering. In talking with him I expressed my desire to play the bush.

The master, standing on his desk, was sketching as he spoke I do not know what burg. He suddenly fell into a chair, whistling so loud that he lost his breath. I had to pass him a bowl of mulled wine in which a round of lemon bathed and half left like a wreck a stick of cinnamon. I metais kneeling before him; he patted my cheek.

You will need my child to take forms of voice and years. My dream came true 33 years later. The master is no longer there; he has entered into immortality, but the reflection of his beautiful soul, the so proud and faithful, is still there, and I felt thanks to him that the great master's laughter had become a benevolent one, and he agreed to smile.

\The item \The seller is \This item can be delivered anywhere in the world.