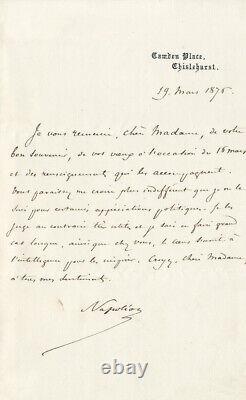 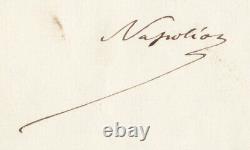 Eugene louis jeans joseph bonaparte. An imperial prince by his quality as the only son of napoleon iii and the eugenic empress, killed by the Zulu at the age of 23. Camden Place, chislehurst 19/03/1876, in which he goes against some bad languages of his party which then reproached him a certain form of wait-and-see in terms of French political life: \"...

You seem to think I am more indifferent than I am to some political assessments. On the contrary, I find them very useful and I know how to make a big case ... This is a written letter. From his English exile, a letter of reply to the vux that has just been addressed to him on the occasion of his birthday celebrated on 16 March.

Letterhead of the place of exile of the imperial house: camden place, chislehurst. Background: Following the death of his father, the former Napoleon iii emperor, and the completion of his military studies at the British Royal School of Artery of Aldershot, the prince effectively took over the leadership of the Bonapartist party, which was beginning to pose a real threat to the third republic then in power in France. Double page with 1 written page, 9 main lines, autograph signature of the imperial prince's own hand, Sun.