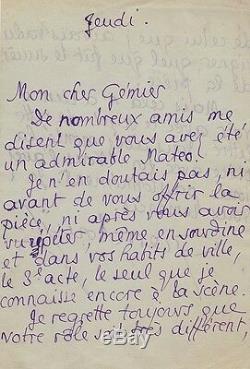 The woman and the puppet. From the novel of p. Which was played at the theater antoine in 1910 and in which gémier held the role of mateo. My dear lover, many friends tell me that you have been an admirable mateo. I did not doubt it, either before offering you the play, or after seeing you repeat, even in muted and in your street clothes, the third act, the only one I still know on the stage.

I still regret that your role is very different from the one I had wanted to sign, whatever the success of the play. But that has nothing to do with the subject of this letter. You have mounted the room with faith.

And theater director, promoter of popular theater and creator of the first popular national theater. (tnp) in Paris in 1920. The item \The seller is \This item can be delivered anywhere in the world.