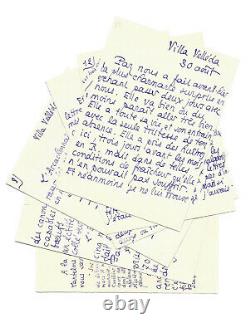 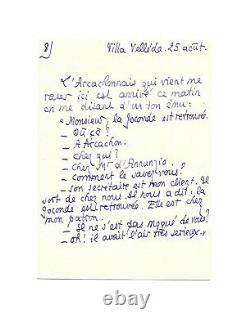 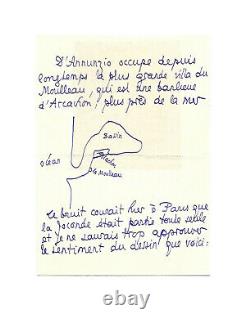 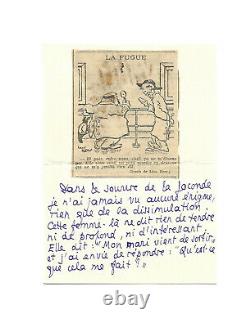 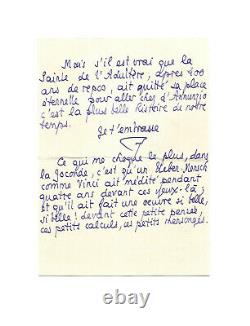 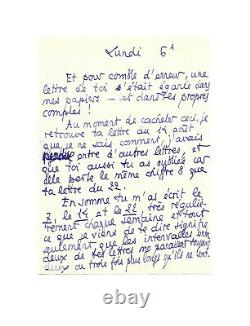 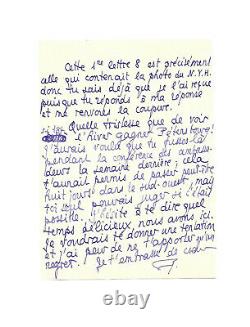 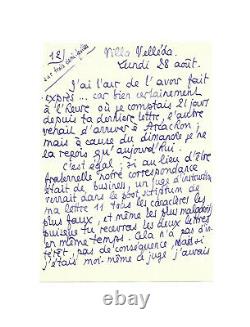 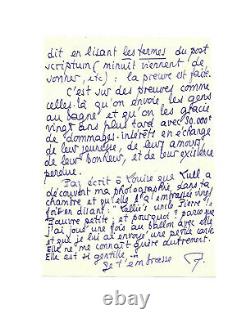 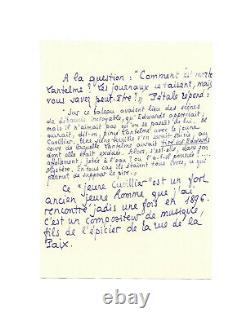 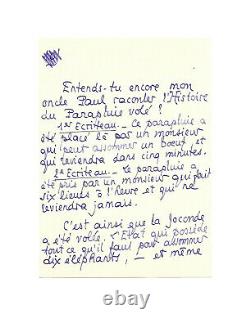 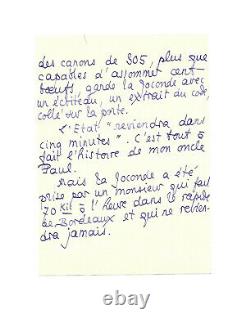 Set of 4 autograph letters signed p and 2 autograph manuscripts to a nearby villa vellada [bassin darcachon, August 1911], 15 pages in-12. Interesting correspondence about the theft of the joconde that occurred a few days earlier, for which gabriele dannunzio was suspected of being the thief, and the case of geneviève lantelme. Larcachonnais who just shaved me here arrived this morning and said to me in an emotional tone: sir, the joconde has been found.

At mr dannunzio how do you know? His secretary is my client. He's coming out of our house. He told us the joconde was found. She's at my boss's. He didn't make fun of you?

He had left it very serious" dannunzio has long occupied the largest villa of the mussel, which is in a suburb darcachon, closer to the sea [stone louÿs elaborates a sketch of the basin darcachon] the noise would run yesterday to bet that the joconde had gone on its own and I would not be able to approve too much the feeling of the drawing as follows: [stone louÿs glued a cut of press appearing the caricature of two policemen at the wash on the place of the flight] in the smile of the joconde I have never seen any riddle, nothing I hide it. That woman doesn't say anything tender, neither profound, nor interesting. She said, "My husband just came out" and I wanted to say, "What does it do to me? But it is true that the saint of adultery, after 400 years of rest, has left her eternal place to go to dannunzio this is the most beautiful story of our time. What shockes me the most, in the joconde, is that a übermensch [superman] called vinci meditated for four years before these eyes there; and that he did such a beautiful, so beautiful work!

In front of this little thought, these small calculations, these little lies. And as a matter of error, a letter from you was lost in my papers and in your own accounts!

At the time of hiding this, I find your letter of August 14th that, I don't know how, I had lost between other letters, and that you too have forgotten because it bears the same number as your letter of the 22. In short you mas written the 7, 14, and the 22, very regularly every week and all I have just told you only means that the intervals between two of your letters always seem to me two or three times longer than they are. This first letter 8 is precisely the one that contained the photo of the n. So you already know that I received it since you answer my answer and send me the cut.

How sad it is to see so early winter winning petersburg! I wish you would have been there during the ambassadors' conference last week; it would have allowed you to spend perhaps eight days in the southwest, but only you could judge if it was possible. I hesitate to tell you what delicious weather we have here.

I'd like to give you a temptation and I'm afraid to bring you only one regret. Jai lait de lavoir does it on purpose because certainly it was 21 days since your last letter, the other one had just arrived at arcachon; but because of Sunday I only receive it today. This is equal; if instead of being brotherly our correspondence was business, an investigating judge would see in the post scriptum of my letter 11 all the most false characters, and even the most clumsy since you will receive the two letters at the same time. This has no interest, no consequence, but if I was this judge myself I would have said by reading the terms of the post scriptum (minuit just ringed, etc. It is on evidence such as this that people are sent to the gallows and that they are pardoned twenty years later with 30,000f of damages in return for their youth, their love, their happiness, and their lost existence.

Paz writes in praise that lull discovered my photograph in your room and what kiss it twenty times by saying: "lallies uncle pierre! Poor little girl; and why? Because I once played ball with her and sent her a little card.

She doesn't know me any other way. The question is, how did you die? The newspapers are silent, but you may know," petal answers.

"on this boat was incredible debauchery scenes, that. [alfred] edwards appreciated; but he did not like that he was passed on. He would have, it is said, pinched lantel with the young [charles] cuvillier. A terrible scene would be followed, during which slowness would have shot at edwards from which she was exceeded. So, did she, in her panic, throw in the water?

In any case they were all drunk, which makes it possible to assume the worst. This "young cuvillier" is a strong former young man whom I once met in 1896. He is a composer of music, son of a writer on the Rue de la Paix. Do you still hear my uncle paul tell the story of the stolen umbrella?

This umbrella was placed there by a gentleman who can take on a beef and come back in five minutes. The umbrella was taken by a gentleman who makes six leagues an hour and never comes back. That's how the joconde was stolen. The state that has everything it takes to assume ten elephants, and even cannons of 305, more than capable of assuming a hundred buffaloes, keeps the joconde with a sign an extract of the code, stuck on the door.

The state will be back in five minutes. That's exactly the story of my uncle paul. But the joconde was taken by a gentleman who's 70 kil.

On time in the rapid burgundy and never coming back. [Laughs] made us the most charming surprise yesterday by coming to spend two days with us. She's fine or at least she's fine. She has all her life and her training with the only sadness of your absence.

She took oysters here, three days before the months in r. But under such conditions of freshness that could not suffer.

And yet I don't think she's very good, without explaining why, because she doesn't complain about anything and she's taking serious care of it. She has not yet taken over the complexion which had last lan.

The article I send you at the end tends to prove that the two naval magazines, the French and the German, put online, to make a number, a quantity of non-values, but that in sum all this is reduced to 12 good French battleships, against 17 good German battleships. We're here when the author arrives at his boat that abounds too much in my sense that I don't send it to you.

This thesis should be given an epigraph: arma virumque cano [I sing arms and lman (virgile, neid, singing 1)], of course. And it's the virumc we miss the least.

The programs of 1902 that gave us in 1911 an illiterate young generation had a curious consequence: it is that Latin returns to fashion. Many writers in 1890 would be mistaken for cooks if they had quoted a small dhorace glass, no longer hesitated before their quotation.

The newspapers are full of virgile, lucrèce stuffed and scarred. It's all natural, besides, it has to be expected that this will go by increasing, since fashion is the snobism of what not everyone has. Good for the novelists who made lantic 20 years ago. On 22 August 1911, the flight of the joconde to the museum of lava had an international resounding.

The world of the arts was upset. The police suspect, among other things, the painter pablo picasso, who is being interrogated at length. In parallel the theft is claimed by several mythomanes, including the Italian writer gabriele dannunzio who had composed in 1898 a tragedy entitled the joconde by dedicating it to eleonora duse with beautiful hands. Everyone knows that Vincenzo peruggia was the thief. The joconde will be returned two years later.

Considered by his contemporaries as one of the most beautiful women of his time, his early and mysterious disappearance at the age of 28 on a cruise on the rhin contributed to his legend. The item "pierre lous / letter autograph signed / la joconde / adulteraire / d'annunzio" has been on sale since Tuesday 23 March 2021. It is in the category "collections\letters, old papers\autographs\others". The seller is "laurent-autographs" and is located at/in versailles. This item can be delivered anywhere in the world.