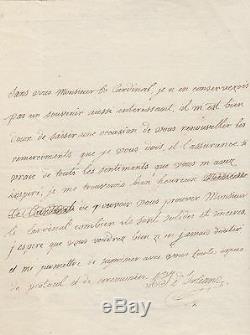 Nice friendly letter to the cardinal. He assures him of his good will in favor of the baron de malsam: \will be with as much speed as pleasure. I will never forget my stay in Rome without you Cardinal, I will not keep such an interesting memory, it is very sweet to take an opportunity to renew the thanks I owe you, and the assurance so true of all If you have inspired me, I would be very happy to be able to prove to you, Monsieur le Cardinal, how solid and sincere they are. I hope you will never doubt it and allow me to remove from you all kinds of protocol and ceremonies. \The item \The seller is \This item can be delivered anywhere in the world.