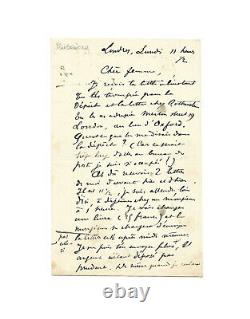 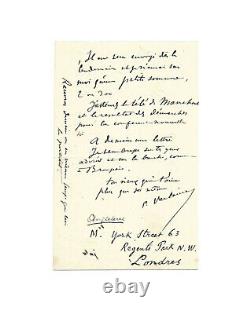 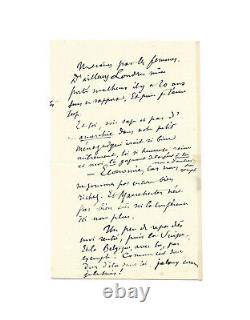 Autograph letter signed "paul verlaine" to his masteress philomène boudin, dit esther londres, [25 november 1893], 3 p. In-8 small ink discharges, discreet Japanese paper repair on the second sheet in the central margin, old trace of assembly on the second sheet in the outer margin. Verlaine wrote to his mistress a tender missive from London where he gave lectures - he eventually reassured her by alluding to his tumultuous journey to the same city twenty years earlier alongside arthur rimbaud, a journey that contributed to the rupture with his first mathematician wife. "Dear woman, I receive your letter right now.

You were wrong about the dispatch and the letter at home. You addressed them to merton street, 19 london, instead of oxford. What were you telling me in the dispatch? Because it would be too long to go to the post office, I'm so busy!

Must have received two letters from me, the day before yesterday and yesterday. It's 11 1/2, I'm expected, far from here, to lunch at my gentleman's house at 1:00.

I will change a book (25 francs) and the gentleman will send the letter (not this one) this very afternoon. I can't send you + today, the money being deposited out of prudence. Likewise when I return, I will be sent the next day and I will have only a small sum, 2 or 300.

I'm waiting for the TV [gram] to wrap up and the result of the steps for the new conference here. See you tomorrow with a letter. I kiss you on your beloved eyes and on your mouth, as I kissed you at [the hospital]. Your old man who loves you. York street, 63, regent's park n. London don't fear women. In fact, London brought me bad luck 20 years ago in this respect. And then I love you too much. And you, be wise, and no anarchy in our little household that would go so well otherwise, you so happy, queen and I earn you money, to you, not to others, for example.

Save it, because we're not rich yet. And cuffing isn't of course, nor the conference here either. A little rest, as soon as I get home, then the Swiss.

And the belgium, for example, with you. How hard it is to be without you, jealous as I am! [he adds sideways to the margin of the second sheet] will receive tomorrow, or at the same time, the portrait." 1893 is probably the year in which paul verlaine is the most man of letters; it is also the year in which he published the most. He gives lectures on contemporary poetry and on himself, knows glory, earns money without retaining it.

He is invited by a group of young English writers and artists arthur symons, ernest dawson, tc. London and william ehemann and left on November 19 for London. He then gave several lectures, including one in Oxford where he was staying at william rothenstein, which was discussed at the beginning of the letter.

Verlaine then referred to the conferences he would finally give on the 1. December and December 5 in London. In fact, London brought me misfortune 20 years ago in this respect." Verlaine makes a total of eight voyages in angleterre, this is the last one.

He alluded in the letter to the very first, in 1872, when he decided to leave with Arthur Rimbaud after leaving his wife and his very young son. The terrible lovers settled in London on September 9, 1872. At the beginning of October, Mathilde Maute filed an application to the seine court. Paul verlaine wrote to victor Hugo two days later to ask him to intervene with his wife, in vain. On October 13, Mathilde obtained a non-conciliation order authorizing him to stay with his parents and obtain custody of the child.