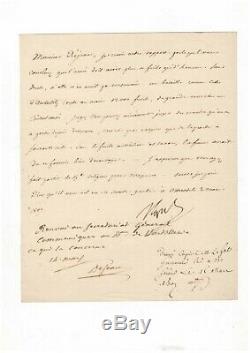 Letter signed \Apostille signed autograph down dejean page. Magnificent letter sourcing rifles deylau few days after the battle. \No doubt, if she had not consumed nen, a battle like Austerlitz costs at least 12,000 rifles, large steps in as cost. You can easily judge the numbers quon has lost the last two years, this is not an exaggeration to wear to sixty thousand.

No Austrian rifles and Saxon, the France would have to provide more. Japprouve you did from the 15th line to mayence. With that, I pray God that he have you in his holy guard.

Napoleon arrived in osterode February 22 and stayed there Completion April 1 before uninstall the castle of Finkenstein. On 14 June, he signed a resounding victory in friedland that will lead to the interview and the Treaty of Tilsit 25 June 1807. The item \on sale since Sunday, 29 March 2020. It is in the category \The seller is \This article can be shipped worldwide.