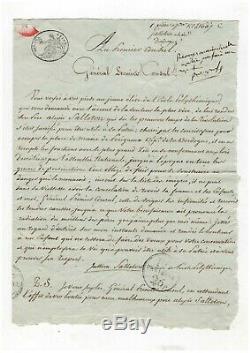 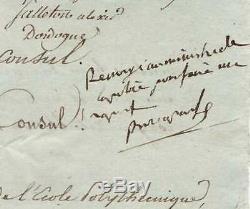 The Consul Bonaparte answers the son of a letter demanding the return of his father emigrated. \You could see your feet a young student who asks lecole Polytechnic The emphasis with the most severe pain to return his father alexis salleton that in the early days of the revolution sétait sacrificed to be useful to his country; chosen by the citizens to occupy the post of mayor of Perigueux dept. In the Dordogne, he served as the greatest zeal in conformity with the laws decreed by the congregation until national lépoque or all kinds of lont persecution forced to flee to escape the danger which threatened him; on the list of emigrants, he can in his old age have the consolation of seeing his wife and children, and I, General First Consul, that of cure infirmities and receive its caresses until your charity has ordered the removal the best of fathers, jaime more than myself.

Throws an interest look at my insistence and Rendes happiness to a child who will not stop making wishes for your preservation and nemploiera life Qua be useful to his country and to prove compliance. I beg you, First Consul General, pending the effect of your kindness to my poor father alexis salleton \Napoleon signed on the sidelines by adding his hand, \Alexis salleton was mayor of Perigueux between December 1789 and November 1791. A riot broke out in the city after that he decided daugmenter bread prices. Struck with sticks by women, he sen came out with The intervention of a national guard.

Unpopular, he had a few months after fleeing the city. The item \The seller is \This article can be shipped worldwide.