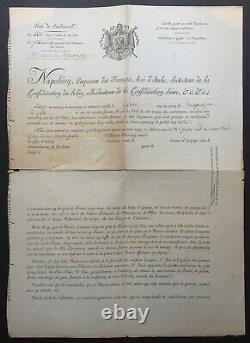 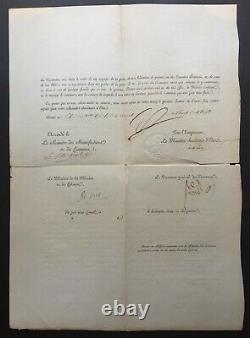 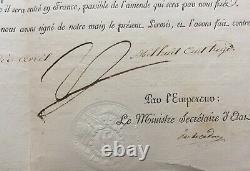 Document concerning the continental blockade; important part of the history of the first empire, the continental blockade is the name given to the Napoleonic policy, which attempted to ruin the United Kingdom by preventing it from trading with the rest of the European. It began in 1806 and ended in April 1814, with the departure of Napoleon to the island of Elbe.

Licence of navigation at the time of the continental blockade, authorizing, under the bail of the house of commerce bousquet father and son of lyon, an American ship "to introduce in one of the ports of france, at his choice, cottons, fish oils, dyeing wood, salted fish and cod; coffees and sugars of the French colonies, lameric and lasie; cocoas, groceries of any kind of the Dutch islands; indigos, mahogany wood and debenistry", to de-export to him an equal value of silk fabrics, wines, brandies and other products of the French manufactures. He was Director General of Customs and then Minister of Manufactures and Napoleon Trade.

As a State adviser and ambassador under the consulate, he became Minister of the Interior and then Minister of Foreign Affairs under the first empire. Prefect marine, he became minister of the navy from 1801 to 1814, vice-admiral under Napoleon. Lateral folded slots, if not good condition (aristophil collection).

The item "Napoléon ier document / letter signed continental blockade 1813" has been on sale since Saturday 17 July 2021. It is in the category "collections\letters, old papers\autographs\historical persons".