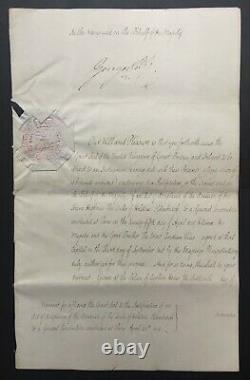 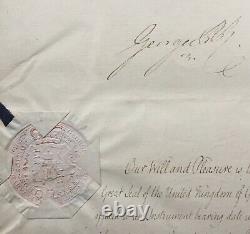 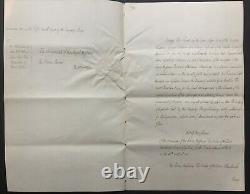 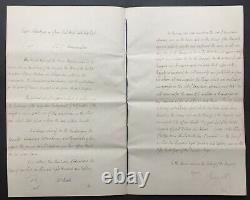 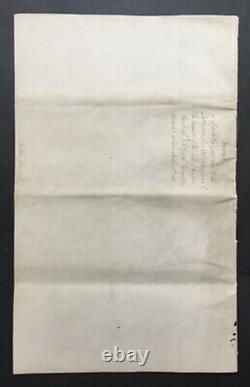 [Napoléon i convention de venez] George iv king d'angleterre document / letter signed - 1818. Document signed "George pr" as Regent and King, palace of carlton house [lendres], November 16, 1818, countersigned by the Secretary of State for War and Colonies, Count Bathurst; 7-page book in folio, bound by a blue silk ribbon, seal with paper weapons in mind; in English and French. Terms of reference for the ratification of the Paris Convention. Mandates of the regent prince, on behalf of the king, to put the great seal of the united kingdom of Great Bretagne and Irish, to the acceptance, on behalf of his majesty, of the act of accession of His Duke of Holstein-oldenburg, to a general agreement concluded in bets on 25 April 1818, between his majesty and his good brother the very Christian king [king of france louis xviii], and signed in bets on 3 September; document accompanied by the attached copy of the acceptance and the act of accession by the Baron of Brandenstein. Georges iv signed a mandate to affix the grand seal on an act "containing our ratification of the act of acceptance of the Duke of Holstein-oldenburgh, to a general agreement concluded in Paris on 25 April 1818". The mandate is linked to the regulations made at the convention to come (1814 / 1815) to reorganize the post-Napoleonian Europe. The Duchy of Oldenburg was a German state located on the left bank of the Weser with a coastline on the North Sea. The reigning dynasty was hostein-gottorp, the family in which Catherine the great Russie was born: "In 1806, oldenburg was occupied by the French and Dutch and the Duke [william] and the regent [his cousin peter frederick louis] fled; but in 1807, guillaume was restored and the state joined the confederation of the rhin in October 1808.

When guillaume and stone refused to exchange oldenburg for erfurt in 1810, Napoleon seized the state, joined it to hanovre and incorporated it into the france. His action was considered in russia as a deliberate affront. This became one of the main complaints of the Tsar Alexander against the france, and an indirect cause of the War of 1812 and the disastrous campaign of russia for napoleon. Oldenburg became part of the new German confederation after 1815.