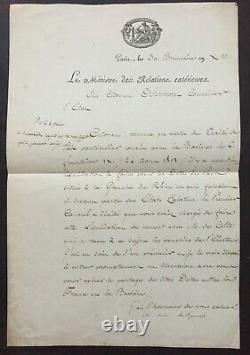 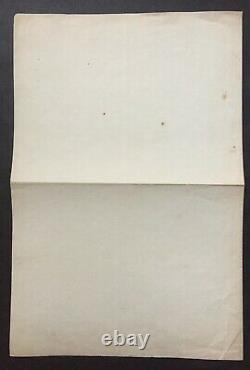 [napoléon ier] talleyrand signed letter luneville treatise and left bank of rhin - 1803. Minister of Foreign Affairs of Napoleon and then Minister and Chairman of the Council of Ministers under the Restoration. Exceptional diplomatic career, whose climax is the congress of coming after the fall of Napoleon. Letter signed, bets, 30 mist year 11 (22 November 1803), 1 page on bi sheet, at the head of the Minister of External Relations, vignette. Letter addressed to the "citizen defermont Conseiller detat" concerning the application of the Treaty of Lunéville the liquidation of the debts of the Palatine states located to the left of the rhin ordered by Napoleon Bonaparte 1.

In 1801, a peace treaty was signed in Luneville with the autrich who withdrew from the second European coalition against the revolutionary france. First and great success for the first Napoleon Bonaparte consul, who seized power a year earlier. Through this treaty, the Bavaria has safeguarded its independence and the voter max-joseph its title.

Bonaparte, while supporting prussia, does not neglect the ship, however, to make it a watchman charged with guarding lautriche. It is in this context that, on August 24, 1801, an agreement was signed between the consulate and a prince of the holy empire, which obliged the voter to renounce, for the benefit of the france, all his possessions on the left bank of the rhin. "citizen, as under the special peace treaty concluded with the Bavaria on the 6 fructidor an ix (24 August 1801), there is a liquidation to be made for the debts of the countries to the left of the Rhine which were before the Palatine states, the first consul has decided that you would be responsible for making this liquidation in concert with antoine de cetto who has received the powers of the reader. I was careful to warn him and I believe he is willing to enter into a quick discussion with you to carry out the division of the so-called debts between france and bavaria".

The left bank of the rhin was annexed in 1801 by the Treaty of Lunéville to form the French department of Mont-tonnerre with mayence as the capital. Good condition sent by registered mail. The item "napoléon ier talleyrand letter signed treatise lunéville et rhin left bank" has been on sale since Saturday 30 October 2021. It is in the category "collections\letters, old papers\autographs\historical persons".