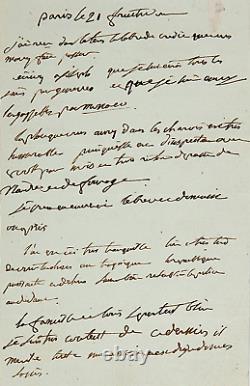 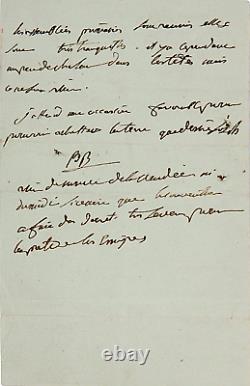 For many years, the autograph library has specialized in the sale of autograph letters and manuscripts. Signed autograph letter to andré ramolino, cousin of letizia bonaparte. 21 fructidor (7 September 1795). Precious and rare letter from the hand of Bonaparte about his brothers Josep and Louis, as well as about the political situation in france after the adoption by the convention of the constitution of year iii. "I received in the tems the letter of credit that you sent me.

Write to joseph that I write to him every day by geneve and send the gazettes to him by monaco. The place you will have in the charois is very honorable since she is an inspector with 800ll a month and three rations of meat bread and baking.

I'll send you the patent tomorrow or later. One is very quiet here one has very wrong to see things to the tragic the powerful republic outside will be able to re-establish the police within. The family and louis are doing well.

I am very pleased with the latter he deserves all my friendship and is worthy of my care. The primary assemblies are united they are very quiet. There is, however, a little heat in the heads, but it will be nothing. I'm waiting for a favorable opportunity to be able to haul the land that desires josep. Nothing new from the sale or from the noon except that the convention has made very secure decrees for the priests and the emigrés. This letter is addressed to the first cousin of the mother of the future emperor: andré ramolino. A Corsican politician born and died in Ajaccio, Ramolino was faithfully protected by Napoleon. As early as 1792, the two men were already doing business, as evidenced by a letter from Cardinal fesch dated 10 September. This fidelity of napoleon will result in a final favor: a few hours before leaving his fallen empire, in June 1815, he made his correspondent the last count of empire. In this missive, Bonaparte promises to ramolino the patent of inspector of the carts. The gift was of a size: under this name were the transports of food, military effects, artillery equipment, and other stewardships that took the form of highly lucrative societies. Joseph bonaparte also held this position. The promise of Bonaparte expressed in this letter was respected. Another letter, addressed to his brother Josep, dated October 9, 1795, is formal: " ramolino is appointed inspector of the carts". Written in the aftermath of the first republican constitution (constitution of lan iii), these lines are a strong testimony of the Parisian atmosphere in these crucial hours of france history.

The character, the ambition of Napoleon, his brotherly love, his republican fervour and his lucidity appear in turn at the reading of this page. Napoleon, in fact, was born only to support his brothers and raise them with him to the top of the state. This concern for their interest appears very clearly in this letter. And the daily correspondence with his brother josep sen at the same time echoes. On the eve of our letter, another addressed to Josep proclaims this same love; "I am very pleased with louis; it responds to my hope and the expectation that I had conceived of him.

It is a good subject; but also it is in my way: warmth, mind, health, talent, exact trade, goodness, it brings everything together. You know that, my friend, I only live by the pleasure I am giving mine. If my hopes are helped by this happiness that never abandons me in my undertakings, I will be able to make you happy and fulfill your desires". Above all, his determination and initial faith in the republic seem unwavering.

Our letter hardly precedes the bloody repression of the royalist insurrection by a few weeks. Bonaparte, in fact, on 5 October, just appointed general in chief of the internal army, will have the crowd machine-gunned on the court of Saint-Roch, killing 300 French. This completeness for the revolutionary cause is very clear and takes under its pen the strength of a historical formula: "the powerful republic outside will be able to restore the police within". It is the Napoleonic politics of the next twenty years that is here, in a few words, summarized! Paradoxically, the reserves of Bonaparte Napoleon on the fate destined for the sale, the priests and the emigrants are frankly expressed.

Once again, our letter precedes only a few days the refusal of Bonaparte to join the army of the West, an army charged with drowning in the blood of the vendean insurrection. This refusal dictated by his conscience will mean that he will be excluded from the list of generals on the part of the public salvation committee, until his coup de force de vendemiaire. The note bene of this letter is of the utmost importance. He said the whole step backwards of Bonaparte on the mistakes of the convention and prophetically announced his constant desire to bring together later, the france de clovis and that of the committee. Check out our manuscripts The Autograph Gallery of Centuries specializes in the sale and expertise of autograph letters and manuscripts of the great personalities of past centuries.

All our shipments are made in registered mail with insurance at a flat rate of 10 for France and 20 for the rest of the world. We can also ship by private carrier at your request. Conditions of sale in accordance with the practice of the international league of the ancient bookstore, we accept a guarantee of return within 14 days. The return costs are borne by the buyer. About all the pieces proposed are originals whose authenticity we guarantee. Our invoices serve as proof of authenticity of the parts sold.

However, at your request, we may issue a certificate of authenticity, in addition. The item "Napoleon Bonaparte signed autograph letter. The powerful republic" has been on sale since Saturday, July 31, 2021. It is in the category "books, bd, magazines\old books, collection".