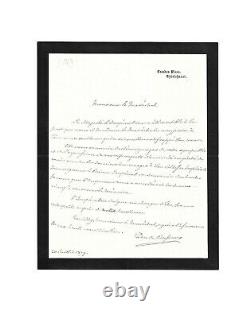 Autographed letter signed "duc de bassano" to the Marshal of mac-mahon [President of the French Republic from May 1873 to January 1879], camden place [residence dexil of the imperial family in angleterre], chislehurst, 30 July 1879, on mourning paper, 1 p. Reply to the condolences addressed to the empress eugénie by the Marshal of mac-mahon and his wife, on the occasion of the death of the imperial prince written on behalf of the empress eugénie to the one who was shortly before president of the French Republic. "His emphatic majesty was sensitive to the part that you and the Marshal took in the immense calamity that so cruelly struck her heart. She thanks you for your sympathies and for the expression of your deep regret for being prevented from coming to pay the last tributes to his imperial Highness Monsignor the Imperial Prince in memory of the high favors that the emperor has bestowed on you and of which you love to keep your memory.

[napoléon iii had in fact awarded patrice de mac-mahon the titles of Duke of Magenta and Marshal of France]. Limpératrice deigns me to be his interpreter to your excellence. Please, Marshal, accept the assurance of my highest consideration. The item "Death of the Prince Imperial Duke of Bassano / signed autograph letter / eugénie" has been on sale since Friday, May 28, 2021. It is in the category "collections\letters, old papers\autographs\others". The seller is "laurent-autographs" and is located at/in versailles. This item can be delivered anywhere in the world.