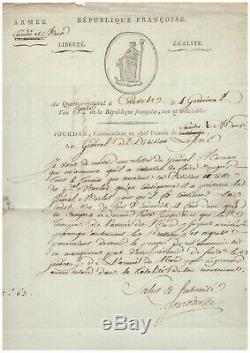 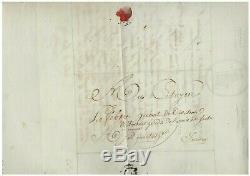 Letter signed, at headquarters shrines? , 4 germinal year 3 (March 24, 1795), to the general françois-joseph lefebvre (future marshal dempire), 1 page in-folio, header of the army of sambre-et-meuse, vignette, address on the back.

\Morlot; that he therefore warned General Morlot to have the construction of the Demmerick bridge continued; So you have to occupy this last post until the troops of the North Army have arrived there because otherwise the boats could become the prey of the enemy. You will not fail to warn the generals of the North Army immediately to show no delay in the totality of your movement. A few months earlier, jean-baptiste Jourdan had won the decisive battle of Fleurus (June 26, 1794) allowing revolutionary France to annex Belgium. The item \The seller is \This item can be delivered anywhere in the world.