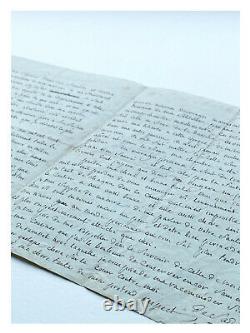 Autographed letter signed "de sade" to his aunte gabrielle-eleonore de sade s. L, April 22, [1790], 3 pp. Large in-8 a few small spots, traces of period folds. Long and vibrant letter from the Marquis de Sade just liberated from Charenton's lhospice he shouted with rage the injustice that his in-laws, these "monsters", made him suffer, and mourned the loss of his precious manuscripts, including that of the hundred and twenty days of sodom when the bastille was taken the previous year.

"I would miss the dearest and most sacred of my duties, my dear aunt, if I did not inform you that I have finally obtained my freedom; it would not fail to my happiness that the satisfaction of being able to kiss you immediately and I will probably steal it, if major matters still hold me here for some time. It is only in your bosom, my dear and kind aunt, that I can lay down the violent sorrows that I receive every minute of my Montreuil family; they would have allied themselves to the son of a carter whom they would not have for him more atrocious and humiliating processes. I wronged them, either, but seventeen.

[years] of woe, including thirteen consecutive years in the two most horrible prisons of the kingdom in prisons where I suffer all the torments that I can imagine, this assembly, I say, of torments and setbacks, must not have atone for his wrongs which in doing so belonged to them more than to me. These people are monsters, I reassure you my dear aunt and the greatest misfortune of my life is my being allied; I acquired by marrying them many banker cousins, some merchants of the new bridge, a couple of hanged and not a protection, not a friend, not an honest individual; the villains are working to ruin me now that they can no longer lock me up. They want to separate me from my wife and as in the beginnings of my marriage they made it easy for me to move on the dowry now it is necessary for my good to answer for these movements and it ruins me. I will hardly have enough to live, and I, who was married only to find a society in my home when I grew old, am left behind, abandoned, isolated and reduced to the sad destiny in which my unhappy father ended his days, from all the positions of old age the one I feared most in the world. By one of those naughty dishes there, except for my children I'm only born to rent myself, not a word, don't hold my hand only when I got out of prison. I found myself in the middle of betting with a louis in my pocket without knowing where to go to eat and sleep, without knowing who would give me a shield when my louis would be finished and receiving only bad people whom I beg only rebuffades and bad compliments; door closed in all and mainly in my wife what is the height of horror; no, no, my dear aunt, no one has ever seen such processes I repeat to you, or never imagined similar ones. I had some furniture, a little linen, a lot of books and more than fifteen volumes of manuscripts of my composition, the fruits of the work of my solitude; by negligence, or rather an incomprehensible wickedness, these ugly people went up to the seat of the bastille. They had just, for fear that I would lose my freedom at that time, sent them out to go to another prison. They never wanted me to take my effects with me; they had the seal put on the door, eight days after came the seat, my room was pushed down and I lost everything precious works, the fruit of fifteen years' labor, I didn't save anything and all this by the fault of those miserable naughters whose I hope god will avenge me one day. Forgive my dear and good aunt, you whom I have always adored, a thousand and a thousand pardons to bore you so much of me but so much grief in the heart that it is impossible not to entrust it to such a good and dear friend as you. I beg you to write, to tell me about your health, to tell me if you still love a little bit, and to be quite convinced that you don't have anyone in the world who is more tenderly and respectfully attached to you than I am. I beg you to remember in the memory of my aunts and cousins whom I was happy to keep incor, not to mention Madame de bousset with which I beg you to make me feel better if there was still something left on her heart against me. I assure you, my dear aunt, of my deep respect, of sad." Written in 1782, first in the prison of Vincennes, the manuscript of the hundred and twenty days of sodomy is entirely assembled by sade in his cell with the bastille. Every evening, between October 22 and November 28, 1785, he copied his drafts on thirty-five lilies of paper, eleven centimetres wide, which, glued to the end, formed a roll of twelve meters long, written double-sided. Protected by a leather case, the manuscript is hidden between two stones in its cell.

On 2 July 1789, twelve days before the capture of the bastille, aade revolted: "He slew yesterday at noon at his window, and shouted with all his might, and was heard from all the neighbors and passers-by, who was slaughtering, killing the prisoners of the bastille, and having to come to their rescue," reports the Marquis de launay, governor of the bastille. He obtained the immediate transfer of the sade to the lhospice of the alienated charenton; he would be released the following year, on 2 April 1790. The item "marquis de sade / letter autograph signed / 120 days of sodome / bastille" has been on sale since Tuesday, October 5, 2021. It is in the category "collections\letters, old papers\autographs\others". The seller is "laurent-autographs" and is located at/in versailles.