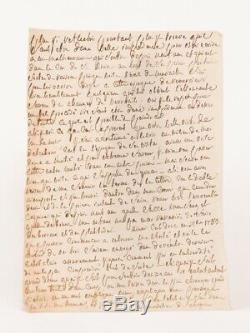 (Circa 1781), 15,7x20,1cm, a sheet. Autograph letter, unsigned, Marquis de Sade's addressed to his wife. A page written in ink, writing clamped on 31 lines. This letter was published in the correspondence of the Marquis de Sade.

This letter was written when Sade's incarceration at Vincennes, probably in April, 1781, if one believes the few time references cited by the editor himself. The marquis indeed speaks of the end of \years.

Sade further back on one of the significant events of his life, his Italian run, which took place between January and November 1776? It was worth as much kill me suddenly and leave me in the foreign country when I was there? The Marquis also evokes \Changing fold? \In April 1781 Madame de Sade gets the king, through his friend Madame Sorans, permission that her husband is transferred to the montilienne prison. The Marquis explained in the letter?

I find it to be a great impudence to dare to write to an unfortunate suffering for nine years ... To thank humbly though the person who got him the astonishing favor of changing the fold? Sade probably referring here to the famous Madame Sorans, pet lady on louis xvi and friend of his wife who, romantic spirit, agree to intercede on his behalf with the king. It is the Commissioner black, cited in the letter, which reborn-pélagie leaves it to announce the new inmate? Ah, I see what it is now your beautiful tour m.

Lenoir I am accustomed to see in the midst of my detention. \Sade is locked up for several years now and this letter while movements betrayed his thirst for freedom. This letter was written at a time when Madame de Sade withdrew the holy-Aure convent. If she captures this retreat as a liberation from marital yoke, the Marquis is in turn obsessed with the idea of ​​its release and also evokes a possible release date?

This long incarceration began in 1777 however last until April, 1790, date of the abolition of lettres de cachet. The Madame de Sade visits will for their restored by the prison administration as July 13, 1781, after four years and five months of separation. Several of the major themes of Sade's correspondence already reflected in the letter of the early years of detention. First, hatred proven against his stepmother, the president of Montreuil, this \Miserable slut who [him] sucks [the] blood ... Dishonored [his] children [who] is not yet satiated to the horrors and platitudes? The Marquis them further complains of his poor physical condition? My head is spinning and I did not need in the state I'm a grief increase? \An unfortunate suffering for nine years? What have I done great god what have I done to suffer for twelve years? Please Note English que la release might Contain errors of translation, we apologize if the formulas are Inaccurate. Eigenhändiger brief unsigned Manuskript, eine seite geschrieben in tinkles, feine schrift auf 31 linien.

The item \The seller is \This item can be shipped to the following countries: america, europe, asia, australia.