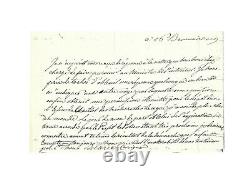 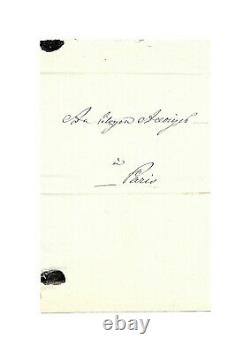 Autograph letter signed " marie carignan " to the citizen accoyet on the 16 mist year 9 [7 November 1800], 1 page in-8 oblong, wax stamp to his figure. Rare letter of Saxon bride-christine, princess of carignan, organizing the transfer of the remains of her late husband who died a few months earlier. I have not received any reply to the nipple that you were responsible for sending to the Minister of the Interior.

[Lucien bonaparte had to give his place to Jean-Antoine chaptal as minister of the interior on the eve of this letter]. I ask you to try to get some kind of answer or to tell me another way through which we can finally get unlimited permission to deposit in the chaillot church the sad remains of what I avouse most dear to the world. The day of my departure and the day of the expiration of the term granted by the police prefect [louis-nicolas dubois] being very soon I would like to know before this tems the result of the approach that I have always taken into account. Please accept the inalterability of my sentiments for you. Marie-christine de Saxonie (born 1770 in Germany) is a princess of the house of Saxony. Sometimes called marie-albertine de courlande, she is the daughter of charles-christian de Saxonie, duke de courlande, and therefore the granddaughter of frédéric-auguste, prince voter of Saxony and king of pologne under the name of august iii.

She married in Augsburg on 24 Oct. 1797 charles-emmanuel de savoie-carignan (which is discussed here), who died in 1800. Widow in 1800, she then exiled herself to genève et bets, joined the empire, refused to raise her son, a putative heir to the Savoyard throne, by the king of sardaigne but found a Calvinist pastor who instilled liberal ideas in the young man. This item is in the category "collections\letters, old papers\autographs\others". The seller is "laurent-autographs" and is located in this country: fr.