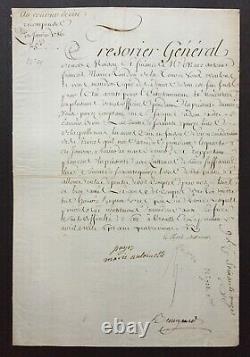 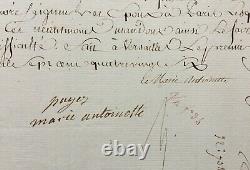 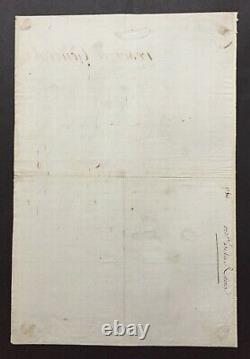 Marie antoinette queen of France - document signed - the king our very honored lord and husband... Last queen of the former regime. Archduchess of Autriche, imperial princess and royal princess of Hungary and bohemia, she is the penultimate child and youngest daughter of the Empress Marie Therese of Autriche and Francis, Emperor of the Holy Empire. Document /letter signed \"marie antoinette\" with an autograph word \"pay\", versailles April 1, 1786 document also signed by the secretary of the hand and countersigned by nicolas joseph beaugeard (in 1793, beaugeard was one of the conspirators in the failed plot to save King Louis xvi of execution), 1 page in-fol. Beautiful document concerning the intimacy of the queen's house in which marie antoinette evokes king Louis xvi \"the king our very honored lord and husband\" and orders the general treasurer of his house and finances to randon the tower to pay jacques adam \"our wine runner\", the sum of 75 pounds in consideration of his services.

In the years leading up to the French Revolution, spending on her lifestyle and palace led to the Queen's increasing unpopularity. By 1785, her public image had already been profoundly tarnished with the \"collar affair\" when she was involved in a fraudulent scheme to buy an expensive necklace.

\"to the wine runner rewards. General treasurer of our house and finances marc antoine françois marries randon of the tower we want and make you only funds by the state stopped for the care and food of several of our officers during this year, you pay cash to s(r) jacques adam our wine runner, the sum of seventy-five gold pounds, from which we have made and are giving into consideration the services he rendered to us during the quarter of January February and March last and bringing back by you with sufficient service the sum of seventy-five pounds will be passed and allocated between expenses of your accounts by our dear and beloved the people and accounts of the king our very honored lord and husband in paris, which pray and nevertheless make it easy to do so.

Made at Versailles on April 1, 1786. Marie antoinette created a special patent in January 1784. The \"wine runner\" who was assigned the task of following the queen in all her movements. Jacques adam, wine runner of the echansonnerie-mouth of marie antoinette. Very good condition - sending by chronopost. The item \"marie antoinette queen de France letter / document signed -louis xvi husband 1786\" is on sale since Friday, February 26, 2021.