Marcel Proust / Autograph Signed / On The Side Of Swann / Jealousy 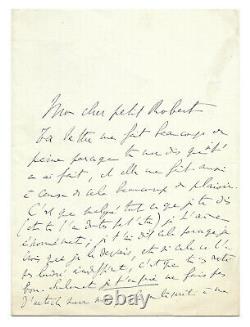 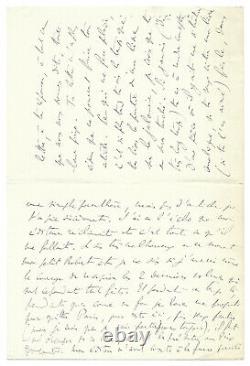 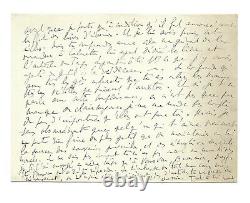 Autograph letter signed \In-4 slight discoloration on the fourth page, some spots. Troublante letter in which Proust delivers with virtuosity his states to Robert de Flers, only a few hours after the launch of his first search volume. My dear little Robert your letter makes me a lot of trouble because you tell me that I did, and she also makes me because of that a lot of fun. It is only in spite of everything I tell you (and you are doubling may be) I love a lot; I told it because I think I had it, and if it did not leave anything indifferent, that you stayed. Only I please do not have a fertilizer on me, it would remove to my letter, to your answer, to all that we said, all their price.

Your letter MA more moved than could do your article. Which will make me pleasure, it's so later you have time. [,] That you read the part of my book on jealousy [a Swann love], I think you will be touched. If ever (in a very long time) you have to account for a room where there is a similar situation, if you want to quote my book (if you loved it) do it, in a simple parenthesis, but not the article I like to pray sincerely .

I had Licho that my publisher [Grasset] claimed and that's all that I needed. I am very unhappy right now my little Robert and I do not know if even the courage to copy the last two volumes that are, however, all [Sodom and Gomorrah and the time found]. And during that time, while like a crazy I rent a property to leave Paris, then stay here, then want to leave. (But I think I'm going to leave forever), we must care about this book, we want to present it at Goncourt Prize.

My publisher did to make it appear before I leave that it was reported before the flood of northern books. And I promised him this echo. But you understand how it bothered me to ask him to Calmette. Having dedicated him the book and the article of time. [,] Having removed T [or] What I added kindly to the dedication.

I understand that all the GR [and] s interests that you have in the hands T [Ute] S These vetils can not stop. And if I wan it with this complacency, it is not that for lack of clairvoyance I do not realize the little dimportance what to you have. But I feel obscurely that someone who really really can do nothing more than keeping the source of juvenile memories in you, and disinterested emotions.

I do not know how you have not had my book yet, I sent you at the same time that Vonoven, Beaunier, Dreyfus. And vonoven my already answered. I tembraze with all my heart but seriously, I ultimately pray and it is sincerely, not the item you make me grief. 1 Proust here alludes to Lécho published in the Figaro of Sunday, November 16, 1913.

Its falling point was always the same: the Grand Hotel. 3 He was initially about presenting Swann's side at Goncourt but lidée award was quickly abandoned. As everyone knows, Proust will get the prestigious price a few years later in 1919 with the second volume of girls in bloom.

4 on the first page from Swann's side, Marcel Proust wrote this dedication: \Gaston Calmette, as a testimony of deep and affectionate recognition \Note that Proust will write shortly before his exit it is possible that because of the very indecency of this book, I do not maintain this dedication \Marcel Proust was forced to deny a number of dedicated house refusals for the publication (including Gallimard House) from Swann's side, the first volume of lost time search. Providential man, Bernard Grasset finally agrees to dedict the novel, in two volumes, at the expense of the person, who must also finance his promotion: on the side of Swann, completed on 8 November 1913, comes in bookstore on 14 November next. Thus, in order to satisfy his publisher and to announce the best the launch of his work, Proust asked a few days earlier to Robert de Flers, then a journalist in Figaro, Den make an echo that will appear on November 16 at the first page of the newspaper. Marcel Proust had himself collaborated in Figaro by publishing it, from 1908, a series of phattiches.

In parallel with this echo, Proust made another in the newspaper the time the day before the publication of the book on November 13, with the contest of Elie-Joseph Wood. The item \The seller is \This article can be delivered anywhere in the world.
autographsgustavehenrimauricelouismailmarcelrarezolaletterhowsignednapoleonbeautifullettrejeanshugowithsignaturelettersparisandrécharlesjeanvictorautograph signedpainterpaulemilegeorgesignautographfrancejulesdocument