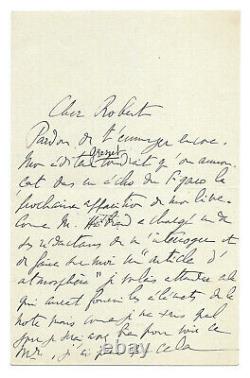 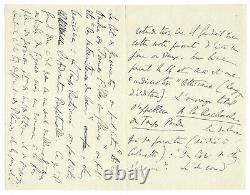 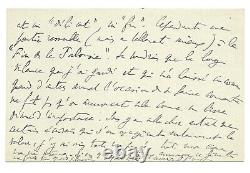 Autograph letter signed \Capital letter in which Proust gives the plan to In Search of Lost Time. \My editor would stifle quon annonçât in an echo of Figaro the next appearance of my book. As mr Hebrard instructed one of his editors minterroger and make me an \m. [Onsieu] r, i fear that it delays too much as it would have this note should pass from here a day or two. My book looks 14 and this is an \Louvrage total sappellera was In Search of Lost Time. [;] The volume that will appear (dedicated to Calmette) \The second side of guermantes, or perhaps \Third: Time Regained or maybe. What to say this is that these are not my items Curb but a novel both full of passion and meditation and landscapes. Especially this is very different pleasures and days and is neither \However, a similar portion (but so much better) at the end of jealousy (6).

I would like the long silence that i kept my left and unknown when others had the opportunity to promote themselves did not make quon annonçât this as a book devoid of importance. Without any tie as much as some writers sen certainly exaggerate the value jy've put all my thoughts, all my heart, my life itself. [Few] lines you can announce this book you would do me good pleasure. 1 This letter is a few days before November 14, 1913, publication date of the next door Swann. Indeed, Proust says \It must date from the 6, 7 or 8 November 1913.

2 adrien Hebrard was director of the newspaper time. A \Proust wrote this letter before to have received the journalist. 3 Note that Proust seeks first published in Curb page Sunday, November 16, 1913. 4 intermissions of the heart is not only one of the most moving sections to In Search of Lost Time (in Sodom and Gomorrah). Proust considered, evidenced by this letter as a possible title densemble. 5 na Proust could choose between these two titles to indicate the outcome of his work, published posthumously. Ladoration perpetual, which is here in question, referred to the holy sacrament in the Catholic liturgy, which is to pay him a tribute uninterrupted.

Thus, dune same parish faithful take turns in front of him in turn, so it there is always worshipers. Note that Proust mentions this title in a letter that he addressed to Gallimard in November 1912. Both titles continue to appear together in the Luvre plan announced in 1918. It is likely that Proust know then that title had already served at. A novel of love, for guy Teramond in 1902.

The final choice for Time Regained also allowed to give a form of syntactic symmetry with the name of whole Luvre. 6 as noted by Jean-Yves Tadié in late jealousy, Proust describes the evolution of love, paradise to hell, like the love of abstract Swann for odette (kolb). It nexiste, according to Jean-Yves Tadié, quune \The writing of it just a week before the launch of the first volume, and the expression of the profound meaning that Luvre represents the author's eyes make a fundamental letter. The item \The seller is \This article can be shipped worldwide.
howjeanwritercharlesmaillettergeorgezolafrancevictornapoleonlouisletterssignaturehenriandréautographlettrejeansbeautifulwithdocumenthugoautographsgustavepaulsignedjulespainteremileautograph signedparismauriceraresign