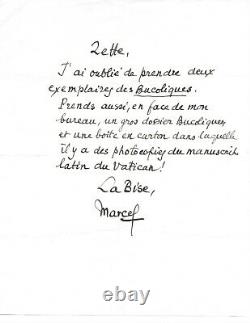 Marcel pagnol (1895 - 1974), French writer, playwright and filmmaker. Autograph letter signed "marcel" to the sur of his wife, georgette bouvier. (circa 1958); 1 pages in-4°. Letter on the promotion of his latest book "the bucolics": "Zette, I forgot to take two copies of the bucolics.

Take also, in front of my office, a large bucolic file, and a cardboard box in which there are photocopies of the Latin manuscript of the Vatican! The bucolic, accompanied by the Latin text, was published in 1958. Transcription of virgile worms, it holds a singular place in the work of pagnol. Wrongly viewed as a mere film director, he wanted to prove through this book that he was much more than that. But far beyond that, he takes pleasure in returning with delight, to the reading of the Roma poets that his teachers had made him discover at the high school thiers de marseille. In this book we find a poetic art, an extension of the famous childhood memories and a beautiful tribute to classical studies. It is an invitation to rediscover works that do not age: "the stars are always the same, and that lifts the head sees them. Jacqueline pagnol, née bouvier, has a roger brother and one on georgette, nicknamed zette.

As a young actress, she met marcel pagnol for the first time in 1938 when he was looking for young actors. They were married in October 1945.

He gives her the role of naive, writes and turns for her manon sources. The item "marcel pagnol letter autograph signed the bucolics" has been on sale since Tuesday 25 May 2021. It is in the category "books, bd, magazines\old books, collection".