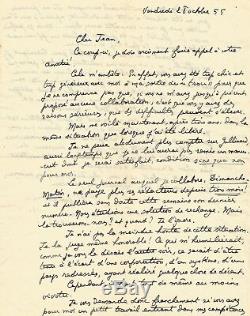 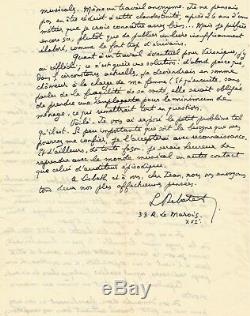 The autograph bookshop of the centuries has specialized for many years in the sale of autograph letters and manuscripts. Autograph letter signed to jean bérard. \Indeed, you were too chic and too generous with me when I left the \can raise. But here I am now, after three years, in the same situation as when I was released. I can not count on gallimard any more, as long as I have not given him a manuscript of which I will be satisfied, a condition sine qua non for me. The only newspaper I work on Sunday morning has not paid its editors for three months! And he will probably publish this week his last issue.

We are studying an alternative. I am not ashamed of this situation. I judge it even honorable! What humiliated me, as I told you the other night, would be to be kept away from a corporation, a system, a country straightened, having achieved something decent.

However, you still have to live at least. I ask you frankly if you have for me a little work in my musical skills.

I did not think to be reduced to this hiding, after 26 years of a job that I think I know quite well. But I still prefer that, rather than publishing an insufficiently elaborate book, as do too many writers. As for a possible work for Veronique, I thought about it; This is hardly a solution: first, because in the present circumstances I would become unemployed at the expense of my wife!

And then, not to mention the fragility of her health, she would be forced to take a replacement for the minimum household, which would put everything in question. I exposed you the little problem as it is. However unimportant the task you may entrust me, I will accept with gratitude. And besides, anyway, I would be happy to resume with the musical world another contact than that of the episodic listener.

Was director of the company pathé-marconi. Sentenced to death in November 1946, lucien rebatet received a petition signed by jean. Paulhan, albert camus, george bernanos, gard roger martin, roland dorgelès, pierre mac orlan, jean anouilh, francois mauriac, paul claudel, and marcel aymé. Is finally pardoned by President Vincent Auriol in April 1947 and has his sentence commuted to life imprisonment. He was arrested at clairvaux prison and finished his novel, the two standards, which will be published by gallimard in 1951 while still in captivity.

He will be released in July 1952 after 7 years in prison. Check out our manuscripts The autograph gallery of the centuries is specialized in the sale and expertise of autograph letters and manuscripts of the great personalities of past centuries.

Purchase / payment methods We accept the following payment methods: bank transfers and checks. Prices shown are in euros and are net. Shipping all our shipments are made by registered mail with insurance at fixed price of 10 for France and 20 for the rest of the world.

We can also send by private carrier at your request. Conditions of sale in accordance with the practices of the International League of the old bookstore, we accept a guarantee of return within 14 days. The cost of return is the responsibility of the buyer. About all the parts offered are originals whose authenticity we guarantee. Our invoices stand as proof of authenticity of the parts sold.

However, at your request, we can issue a certificate of authenticity, in addition. The item \The seller is \This item can be delivered anywhere in the world.